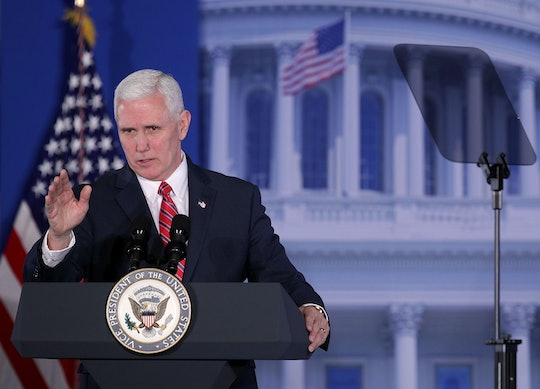 Pence's Vote On DeVos Was A First

On Tuesday afternoon the Senate voted to confirm Betsy DeVos as the new Secretary of Education — a cabinet appointment that has been hotly contended since President Trump made the announcement several weeks ago. The Senate was ultimately split in its vote, and Vice President Mike Pence had to cast the tie-breaking vote that ultimately won DeVos the confirmation. Has a vice president ever had to break a tie for a cabinet nominee before? It's a historic move, and a lot of people aren't happy about it.

While other appointments have been voted on and confirmed without a hitch, DeVos' nomination was met with so much outcry from the public that a couple of Republican senators (Susan Collins of Maine and Lisa Murkowski of Alaska) ultimately voted against DeVos while the rest of the Senate Republicans held firm. The night before the vote, Senate Democrats "held the floor" in protest of DeVos' nomination. Concerns about her lack of experience in education have been mounting since her confirmation hearing, and the public's response to her appointment has sparked some important conversations about the state of the American public school system and the social inequalities that impact a child's educational opportunities. When it came time to vote, the lack of complete bipartisanship resulted in a tie. When no senators wanted to change their vote, Vice President Mike Pence was called upon to cast the vote that confirmed DeVos' appointment.

In case you need a refresher, one of the only actual constitutional responsibilities the vice president has is to serve as the tie-breaking vote for the Senate. Usually these ties end up happening while legislation is being debated, and it's the vice president's vote that will move something along or stop it in its tracks. In terms of breaking tie-votes for Cabinet appointments, though, DeVos' confirmation is a first.

According to NPR, a tie-breaking vote by the vice president has only been used (as of Tuesday's vote) 245 times in the nation's history — but never once before for a Cabinet appointment. Part of the reason why was that, prior to 2013 when it was changed, Cabinet appointments needed 60 votes — as opposed to just the majority, as the case is now.

Former Vice President Joe Biden didn't get to cast a single tie-breaking Senate vote. On the other hand, the first vice president to have the honor — John Adams — cast 29. But casting a tie-breaking vote isn't something that the vice president necessarily wants to do: it's a vote that will always be high profile and no matter which way it goes, will upset a lot of people. The expectation, of course, is that the vice president will cast a vote that aligns with the administration's party and the Senate majority.

Should more ties occur during Trump's presidency, Pence will once again be called upon to break the tie. With a Republican majority Senate and a Republican administration, we can be fairly certain that he'll vote in favor of his party's wishes. With a few more contentious Cabinet appointments to be made, and continued resistance from constituents of Senators on both sides of the aisle, it may be that Pence breaks his own record for voting in favor of controversial cabinet appointments, should the opportunity arise again.