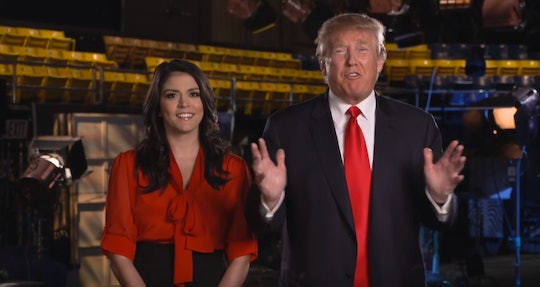 Has Donald Trump Been On ‘SNL’ Before? The GOP Candidate Hosted Once Before in 2004, & It Was Awkward AF

They say strange things happen during full moons: pregnant women go into labor, grown men turn into werewolves, and Donald Trump hosts Saturday Night Live. Oh wait, this Saturday isn’t a full moon? My bad. But with Donald Trump’s scheduled hosting gig on SNL you could have fooled me. I mean, Trump's funny — but more in that "wow, his antics are utterly ridiculous" kinda way. Not in a "man, he's gonna slay it up there on stage" kinda way.

And how do I know? I just spent my afternoon watching clips from Trump's 2004 SNL appearance, and it seems the man with infamous hair and infamous opinions sort of sucks — on the comedic front of course. Don’t get me wrong: he was hardly SNL’s worst guest — I'll leave that honor for Justin Bieber, Paris Hilton, or Stephen Seagal — but being the best of the worst doesn’t say much.

From what I can tell, Donald Trump has zero comedic timing. He is stilted. He is awkward, and his stage presence leaves a lot to be desired. (At least, based on 2004 Donald.) And while his monologue did start off OK — well, OK-ish — he lost me at “ratings machine.” And it’s good to know that 11 years later "The Donald" hasn't changed.

Because here’s the thing: In all of these clips, Trump is playing Trump, which is fine for the monologue but problematic when we get to sketches. In the sketches Trump appears “too good” to be a character; instead, he opts to act like himself — an arrogant, ignorant, and pompous ass. The only exception is The Prince and the Pauper sketch (but I’m not sure if he, the mustache, or Darrell Hammond made me giggle).

All I know is that I’m going to have a few beers before I tune in this Saturday, because if Trump can’t make me laugh I’m banking, at least the booze will do it. Amiright?