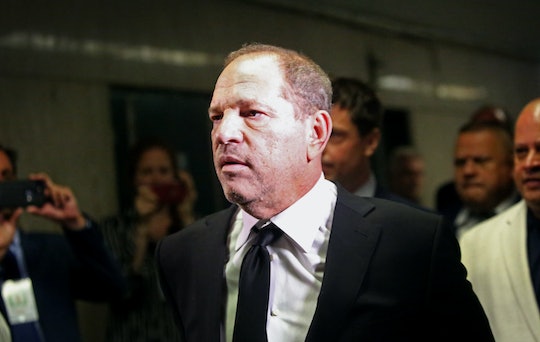 The Hulu documentary Untouchable has an apt title. It tracks Harvey Weinstein's rise and fall, and alleges that his position of power in Hollywood insulated him for decades. He was so wealthy and connected in the industry that it took years for allegations of sexual assault against him to come to light. Now that they have, it's still a struggle for justice to be served. He was finally arrested on rape charges in 2018, per The New York Times, but Harvey Weinstein has not been convicted yet. He's still awaiting trial.

Weinstein was initially arrested on charges of first-degree rape, third-degree rape, and first-degree criminal sex act, as reported by the NYT. He now stands accused of five sex crimes in total, according to The Guardian; the three original charges, as well as two counts of predatory sexual assault. A new indictment was added in August 2019 that termed the assaults as "predatory," which could earn Weinstein more time behind bars if convicted. However, he has pleaded not guilty to all charges and is currently out on a $1 million bail.

Weinstein's trial was supposed to occur in early September 2019, per USA Today, but was pushed back until Jan. 6, 2020. That's because the defense is entitled to a period of 45 days to "file new pretrial motions" after the new indictment. If the trial is not delayed further, then Weinstein won't be convicted or acquitted until the beginning of the new year.

The prosecution is hoping to include the testimony of Sopranos actress Annabella Sciorra, who alleged that Weinstein raped her in 1993. Though the statute of limitations prevents Sciorra's case from being prosecuted, per the NYT, her story can potentially support the charges of predatory sexual assault. According to the New York State senate website, for predatory sexual assault to be proven, the charges of rape in the first degree or criminal sexual act in the first degree would have to be proven to be committed "against one or more additional persons." Sciorra's testimony can theoretically show that.

At a press conference, Sciorra's lawyer Gloria Allred commended Sciorra for her "willingness to take the stand and answer questions under oath," according to CBS News. Allred went on the say that Sciorra was willing to share her story despite the fact that cross examination by the defense "would not be pleasant for any witness to endure." Allred believed that it was important to hear the testimony of accusers because it establishes Weinstein's pattern of behavior. She was curious why the defense was "so afraid" of hearing from additional witnesses.

Meanwhile, one of Weinstein's lawyers, Donna Rotunno, criticized the indictment as an "11th hour maneuver" and referred to the prosecution as "desperate," as reported by Variety. "We just received a copy of the indictment and we plan on filing many motions to dismiss these counts," Rotunno said.

It will be several months (or more) before the case against Weinstein goes to trial. It's still ongoing, which means there are no answers yet.

Untouchable is currently available on Hulu.