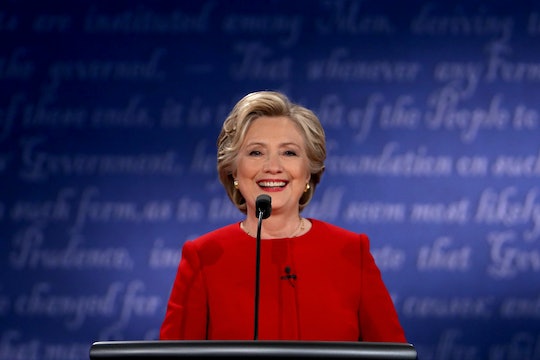 Has Hillary Clinton Been Fighting ISIS Her Whole Life? Donald Trump's Debate Claim Is Off

The first presidential debate is heating up and Donald Trump, as expected, didn't waste any time slinging mud at his opponent. On the subject of ISIS, Trump said to Hillary Clintonk "You've been fighting ISIS your entire adult life." Taking a look at Clinton's fact-checking site, her plans regarding ISIS are clear. In fact, when asking yourself, "Has Hillary Clinton been fighting ISIS her entire adult life?" you can't help but somewhat agree: she's definitely been working to defeat ISIS longer than many — certainly Trump.

Clinton states on her website that, “Walls won’t protect us from this threat. We can’t contain ISIS—we must defeat ISIS," and goes on to lay out her plan in three key steps:

Trump attacked Clinton for laying out her plan so publicly, claiming that she's supplying the enemy with her plans and, subtly, that she's essentially sharing military secrets and/or potential future military operations because, well, this is the internet.

The biggest challenge may well be finding a way to resolve the civil war in Syria, which is where much of the terror begins; not just for the United States, but for the innocent people of Syria who are killed in droves by the same terrorist groups that have attacked places like Brussels, San Bernardino and Paris.

Clinton emphasizes the need to be quick-thinking in response to ISIS' ever-evolving strategies for terror, and that as a country America should focus on strengthening our alliances with other nations.

But to Trump's point — has Hillary Clinton actually been fighting the terrorist organization her entire adult life? No — quite simply because ISIS hasn't existed for Clinton's entire adult life. After al-Qaeda, as the group was originally known, was disbanded in 2008 by United States military offensives in Iraq, it reformed itself as Islamic State in Iraq and Greater Syria (ISIS) just three years ago in 2013. In other words, ISIS is a re-brand of a problem that existed well before Clinton was Secretary of State.

At the most, fighting the group known as ISIS or al-Qaeda, depending on which decade you're in, has been a priority of Clinton's for just the latter part of her adult life: which has thus far spanned 68 years, more than half of which has been devoted to a life in politics.

Her plans to fight ISIS if she becomes president are summed up nicely on her website and she believes that the United States is prepared to do just that:

No other country can rally allies and partners to defeat ISIS and win the generational struggle against radical jihadist terrorism. Only the United States can mobilize common action on a global scale in defense of our peoples and our values. And that’s exactly what we need to do.

The idea that Clinton has been fighting ISIS the other night is the same ficitious idea that ISIS was created by current President Barack Obama, calling Obama "the founder of ISIS." But hey, this is Trump on a national debate stage. He doesn't have room for facts, right?