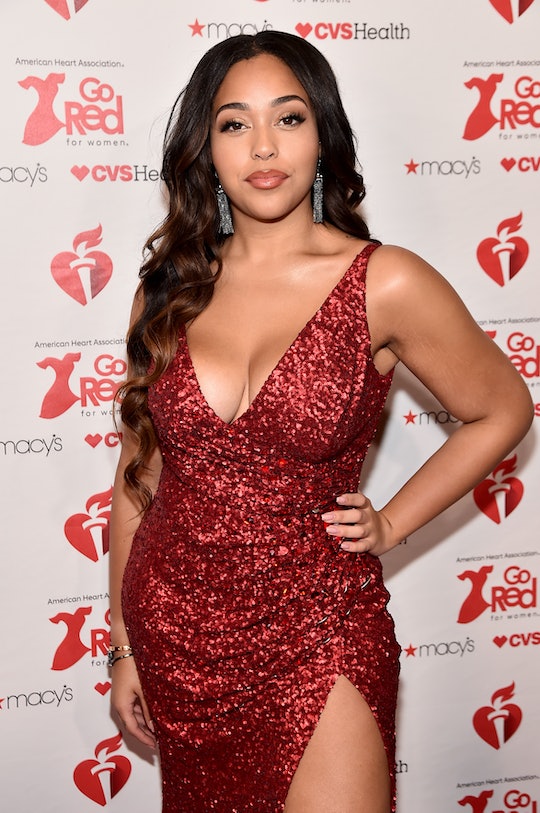 Who Knows If Things Will Ever Mend Between Jordyn & The Kardashians

Keeping Up With The Kardashians finally saw it all go down Sunday June 23 when E! aired Part 1 of the Season 16 finale. On the show, Jordyn didn't give Khloé much information about the night In Touch Weekly reported she and Khloé's then-boyfriend Tristan Thompson were "cuddling". But it's been about four months since it went down in real life so has Jordyn Woods apologized? KUWTK fans want to know that truth. As usual with all things Kardashian — it's complicated.

On Sunday night's episode Khloé says, "Never once has Jordyn said 'I'm sorry.'" That has since changed. Kind of. Sort of. Maybe. Depending on your interpretation of a true apology. At the launch of her second design collaboration with Boohoo the model told Enterntainment Tonight, "It's just, you know things happen... Of course I'm sorry and apologetic as much as I can be, and, you know..." If just saying the words counts as an apology this counts. But in my opinion, the way you deliver any words you say to someone is what really matters, and to be blunt, Jordyn doesn't sound very sincere. The video is below, I'm going to let you make up your own mind about it.

I don't know if Jordyn has ever called Khloé to apologize since Khloé and me sadly aren't friends in real life. That's the only apology that actually matters. I hope everyone can agree on that. It's not my job to shame Jordyn, I'm just calling the apology like I see it. The truth is this scandal hurt a lot of people including but not limited to baby True, Khloé, Kylie, and Jordyn herself.

Khloé was rightfully angry at both Jordyn and Tristan about the situation. But she let the pressure get the best of her after Jordyn's Red Table Talk interview with Jada Pinkett Smith where Woods said "Never once was I giving him a lap dance, making out with him, sitting all over him, it's just, we're all together, we're in a group." She also said, "I know I'm not the reason that Tristan and Khloé aren't together."

Khloé took issue with Woods going to a public outlet instead of calling her privately like Tristan did, and she spoke her mind on Twitter. On the KUWTK finale Khloé addressed how those tweets affected Jordyn. "I realize that the world took [the tweets] so literally," she tells her sister Kim in a scene. "Like, I would never blame solely one person for that. There's a multitude of things. So I feel bad. Even though Jordyn played a part I do feel bad if anyone would think I'm putting the sole blame on her. Because that's not the truth, and I only like to speak my truth."

If you didn't know it from watching everything else Khloé has endured over the years, she's one strong woman. In a confessional interview before the scene with Kim, Khloé says through tears, "I know as much as [Tristan and Jordyn] hurt us, I also know that if this can make them better and if I can be that person then, like I know I'm strong enough to do that. It just sucks it has to be so public, because no one understands how I'm not just a TV show. Like, this is my life and it breaks my soul and it's happened so many times."

*Sigh* It's all so sad and I wish it never happened. I hope everyone involved can find their own peace, whether fans see that happen on TV or not. Remember, Baby True is caught in the middle of it all.