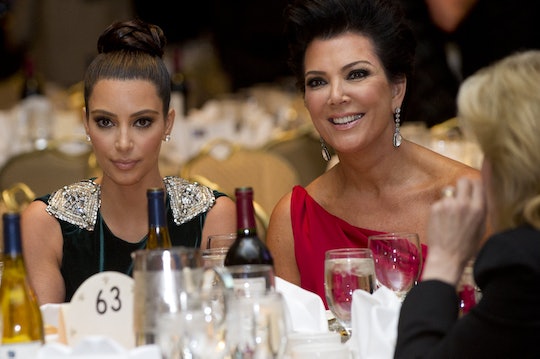 Kris Jenner Knows *Everything,* But She's Not Talking About Kim Kardashian's Surrogate

Every one (and every mother) knows that the saying goes, "mother knows best" — but that definitely pertains to Kris Jenner. As the matriarch of the Kardashian family, Jenner is responsible for launching the careers of her children and launching the trends and national Kardashian obsession that since followed. It is this closeness to her family (and the mastermind she is) that has made the Kardashian family so successful. Without Kris Jenner, the Kardashians would never be as big as they are today. So with daughter Kim Kardashian expecting her third child, reportedly via surrogate, in the new year, it is very likely that Kris Jenner has met Kim Kardashian's surrogate — although nothing is 100 percent certain.

During the new season of Keeping Up With The Kardashians, Kardashian confirmed the very exciting news — she and husband Kanye West are expecting their third child, which is reported to be via a surrogate given the mom of two's prior pregnancy difficulties. Kardashian's reported use of a surrogate comes on the heels of her having to receive surgery on her uterus due to having placenta accreta with her two previous pregnancies. This was all caught on camera during an episode of KUWTK which aired in April. After Kardashian's surgery, Jenner, of course, was there to comfort her. Jenner said during the episode, according to E! News:

I'm proud of you because you're so strong, but it just breaks my heart that you're in so much pain. You're going through an awful lot of trauma to your body and emotional stress and I'm just not sure if it's worth it. I just don't want you to do something that would put you in great danger.

Thus, Kardashian's decision to reportedly use a surrogate was made — and in the trailer for the Season 13 of KUWTK, Kardashian confirmed they were "having a baby."

But that is all that the Kardashian family (including Jenner) has confirmed about the surrogacy reports. But because Jenner has been so supportive of her daughter through her surgery and struggle to get pregnant for a third time, she more than likely has met Kardashian's surrogate. Jenner and Kardashian are definitely close — close enough for Jenner to offer to be her daughter's surrogate herself.

During an episode of KUWTK in May, according to E! News, Jenner revealed that at her age of 61 years old, she could still carry a child to term and that she would love to carry Kardashian's baby. "If I really thought that I could carry it for you and it would be born OK, I would do it in two seconds," Jenner told her daughter, according to E! News. "I really would."

Although it is highly unlikely that Jenner is currently carrying Kardashian's baby, it is clear that the mother and daughter don't keep much from one another — like all of the exciting updates involved in having a surrogate.

People also reported in June that Jenner is super excited about Kardashian's reported use of a surrogate and a Kardashian insider told People that Kris thinks the surrogate is "a great idea."

But just because Jenner is super close with her family doesn't mean she's spilling the beans. When asked about the pregnancy rumors surrounding youngest daughter, Kylie, Jenner remained silent, telling The Cut that "something happens every single day... You never know what is going to break at any given moment."

So even if Jenner has met Kardashian's reported surrogate, it is very likely that she would not say anything, out of respect to the surrogate and Kardashian herself. According to Entertainment Tonight, Kardashian and West are "protective" and "supportive" of their surrogate, especially when it comes to her privacy. Any public meeting between the surrogate and the family, or any public statements made about her would be an obvious violation to that.

You can't hide much from Jenner — instead, Jenner does the hiding from everyone else. There is no telling what kind of information Jenner knows, such as the identity of Kardashian's surrogate. But, given who Jenner is, it's definitely likely she knows her identity pretty well.