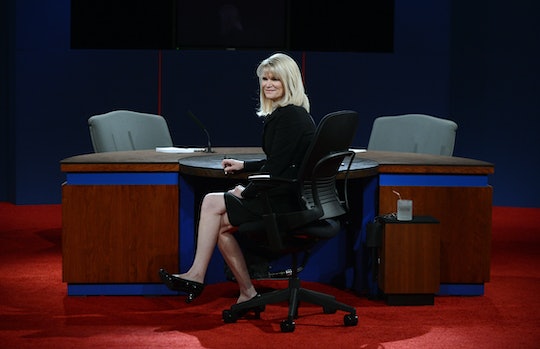 Has Martha Raddatz Moderated A Debate Before? (Yes, And She Killed It)

Saturday’s Democratic debate on ABC will be hosted by Martha Raddatz, one of the network's anchors. If you're not familiar with Raddatz, you may be wondering, Has Martha Raddatz moderated a debate before? The answer is definitely yes. Raddatz hosted the vice-presidential debate way back in 2012 between Paul Ryan and Joe Biden. It made her famous — her performance was so iconic that later the debate was parodied on Saturday Night Live, and she was played by Kate McKinnon.

Talk about life goals. Raddatz and David Muir from World News Tonight will host the debate, and if you think she was tough in 2012, she’s probably going to do her thing tonight. Back in 2012, The Huffington Post wrote that Raddatz "immediately proved that she was going to be a more active, feisty moderator than Jim Lehrer was in the first presidential debate.” She asks specific, complex questions so the candidates better be ready to get down to business tonight.

Conservatives like to say that Raddatz is straight up biased, but she otherwise drew mostly praise from media outlets and political junkies back in 2012. The New York Times wrote at the time that Raddatz was excellent right from the beginning:

Martha Raddatz of ABC News didn’t ask puffy questions like Jim Lehrer did at the presidential debate. Or let the candidates get away with vague non-answers, as Jim Lehrer did. Ms. Raddatz acted like a working journalist instead of a television personality from her first question, on Ambassador Stevens’ death: “It was a pre-planned assault by heavily armed men,” she said.

With Raddatz in charge, this might actually be a productive evening for the candidates, and politics in general.

More Like This
Teacher Shot By 6-Year-Old Student Told School He Had A Gun, Was Told To "Wait"
Freeze! The Single From The New 'Bluey' Album Just Dropped
Does The FDA's Plan To Limit Lead In Baby Food Go Far Enough?
Marie Kondo Gives Up Tidying Post-Kids, Sparking Joy For Moms Everywhere
What Parents Are Talking About — Delivered Straight To Your Inbox