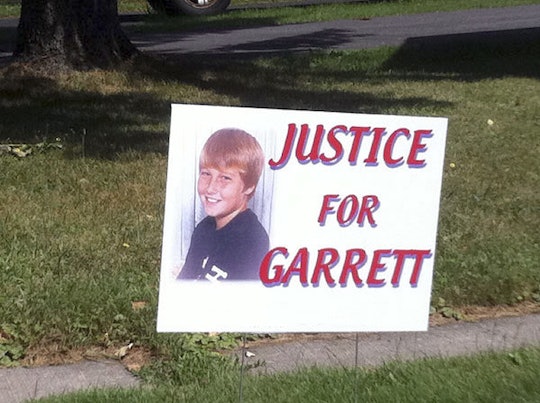 HBO’s new documentary series, Who Killed Garrett Phillips?, explores the 2011 murder of Garret Phillips, a 12-year-old boy who was brutally attacked in his apartment after returning home from school. During the initial investigation, police honed in on a suspect who was later tried and found not guilty. It’s been almost eight years since the boys murder, and many are wondering if the Garrett Phillips case has ever been solved.

As reported by ABC News, on the afternoon of Oct. 24, 2011, a school surveillance camera caught Phillips riding home from school on his skateboard in his hometown of Potsdam, New York. Soon after, neighbors Sean Hall and Marissa Vogel heard fumbling and screams from the Phillips’ apartment, and when Vogel went to their door to knock to ask if everything was okay, she heard the door “click” and lock from the inside.

Realizing someone was inside the apartment, Vogel called 911, and when police arrived, they found Phillips lying unconscious in his apartment. He was rushed to the hospital, where he went into cardiac arrest and eventually died. According to the ABC News report, the coroner found bruises and chafing on Phillips’ body, as well as evidence of strangulation, and confirmed his death was a homicide.

Unfortunately, the case is still open and the identity of Garrett's killer remains a mystery. However, according to North Country Public Radio, there’s a new lead in the case. State troopers received a tip last fall, and the lead is currently under investigation by St. Lawrence County’s new prosecutor, Gary Pasqua. But investigators remain tight-lipped about the new information, and it’s unclear whether or not police will pursue the case.

The only suspect in the case, as reported by The Wall Street Journal, was Tandy Cyrus’ (Phillips’ mother) ex-boyfriend, Nick Hillary — a Jamaican immigrant in a largely white town, who many believe was singled out because of his race. Police charged Hillary with Phillips’ murder, but the lack of evidence in the case led a judge to find him not guilty at trial.

With Who Killed Garrett Phillips?, documentary filmmaker Liz Garbus exposes how local police focused solely on Hillary while ignoring other potential leads in the case. In an interview with Variety, she noted Hillary’s race played a big role in his arrest. “From the police’s point of view, they thought they had the best suspect — the most they could put together on someone,” Garbus said. “But you can’t take race out of the picture — the way in which white Americans are just more likely to look at Black people as capable of committing crimes. The issues around race and policing and prosecutorial misconduct have been huge issues across our nation. And that was the tunnel vision.”

Garbus hopes her documentary stirs public consciousness and leads to a break in the case. “True crime is popular because there’s a healthy impulse to want these things to be solved,” she told Variety. “Tips come in. People want to be heroes — so many armchair sleuths, so many Reddit boards, so much discussion only increased the chances of it being solved.”

In light of the docuseries and the new lead in the case, I hope the real killer is caught soon, so that the Phillips family and Hillary can finally find peace of mind and move forward.