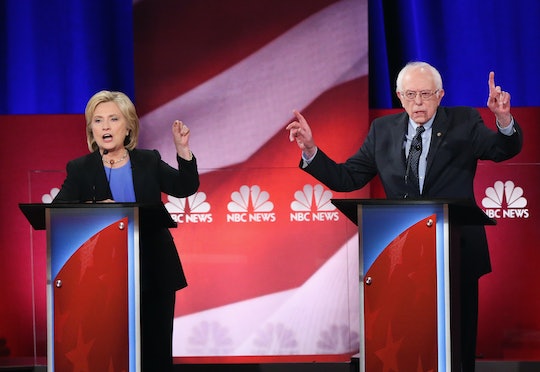 Has The Iowa Caucus Tied Before? Clinton & Sanders Just Made History

Though Monday night’s Iowa caucuses went without a hitch for Republicans, Democrats can’t say the same. Former Secretary of State Hillary Clinton and Vermont Sen. Bernie Sanders were locked in a virtual tie and neither candidate was actually declared the real winner. Though the party is tied up figuring out who actually won this thing, it is leading many to wonder: Has the Iowa caucuses ever tied before? The two candidates just made history (though Clinton probably isn't happy about it).

Political experts have called it the tightest Iowa caucus in history — and it is no understatement. While the New York Daily News reported that Clinton has declared victory, the Sanders camp said it is far from over and hasn’t ruled out challenging the vote. To give you an idea of just how close this race was: Clinton won 699.57 state delegates when it was all over, and Sanders won 695.49, according to USA Today. And what about former Maryland Gov. Martin O’Malley? He only got 7.68 state delegates, so he suspended his campaign on Monday.

Before exploring the history of ties in Iowa, a bit of background about the Iowa caucuses is worth mentioning. The caucuses have taken place in Iowa since the state gained statehood in 1984. However the event received little to no attention until the 1970s. NJ.com reported that the Iowa caucuses we know today gained popularity in1976 when President Jimmy Carter used it to jump start his presidential bid (Democrats also rescheduled the Iowa caucuses in 1972). From there, the Republicans moved their caucuses to run at the same time as the Democrats, making it the first presidential race to occur every four years.

So, have the Iowa caucuses ever tied? No, but there was one occasion where it was extremely close. And yes, it involves the Democrats once again. In 1972, Iowans voted “Uncommitted” over future Secretary of State Edmund Muskie. This “race,” so to say, was extremely close as well, with Muskie gaining 35.5 percent of the vote — only a fraction less than the 35.8 percent of voters who decided to not back any nominee. While Iowa caucuses have had close calls since then, the 2016 Democratic race is in a category of its own.

The Iowa outcome is significant, because it can affect who donors back, but, because this caucus was so close, the New Hampshire primary next week will take on a new significance.