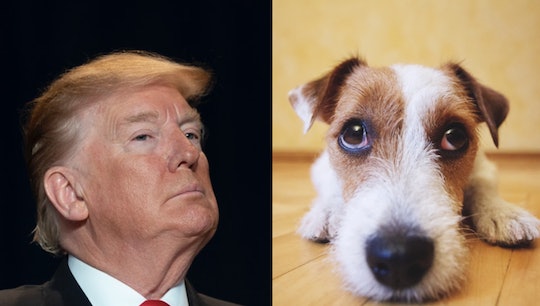 This May Be Ruff To Hear, But Trump May Not Be Not A Dog Person

President Donald Trump is the only modern president to forgo the tradition of owning a pet dog while in office, according to The Washington Post. With this in mind, it's fair to wonder if Trump has ever had a pet or if he just isn't a fan of furry friends in the White House. So, what gives?

Considering Trump's presidency is rife with distractions and gaffes, some people might not have noticed that the first family doesn't own a dog. Although it's reasonable for a person to decide against pet ownership for various reasons, Trump's decision stands out because it bucks presidential tradition. President Barack Obama, for instance, owned a sweet Portuguese Water Dog named Bo, while President George W. Bush was a dog dad to an English Springer Spaniel named Spotty. And most bizarrely, President John Adams had a pup called Satan, according to CNN.

Trump addressed his noticeable divorce from tradition at a campaign rally in El Paso, Texas on Monday night, bringing up the topic while "describing the drug-detecting abilities of German shepherds that work for the U.S. Secret Service," according to TIME.

“I wouldn’t mind having one, honestly, but I don’t have any time,” he told the crowd, according to The Washington Post, before asking, "How would I look walking a dog on the White House lawn?”

After some reported cheering, Trump added, according to the New York Daily News: “I don’t know … I don’t feel good. Feels a little phony, phony to me."

I can't begrudge Trump for being honest about the situation, but I do find it odd that this is the one topic he has chosen to be forthcoming about. Americans still haven't seen his tax returns, he has misled the public about immigration at the U.S.-Mexico border, and he can't seem to give a straight answer about anything — but he doesn't want to mislead the public about pet ownership? It's an arguably strange place to draw a line in the sand.

It's true, however, that Trump isn't big on pets. Trump's ex-wife, Ivana Trump, touched on this sentiment in her book, Raising Trump.

“Donald was not a dog fan,” she wrote, while referencing the moment when she brought home a poodle named Chappy. “It’s me and Chappy or no one!” she supposedly told Trump after he expressed displeasure at the pooch's arrival, according to Newsweek.

Although Trump eventually agreed to host the animal, Chappy was never too fond of him. “Chappy would bark at him territorially,” Ivana added.

As for Trump's childhood? There's isn't much evidence of a pet dog or cat in his background easily available on the internet, but it's possible his family owned an animal at one point. On the other hand, the book, Trump Revealed, made the claim that animals were "banned" from his childhood home, according to the Daily Mail. If the allegation is true, it would explain a lot about Trump's thoughts on the subject today.

Although it's not exactly clear whether Trump owned a pet as a young lad, as his daughter, Ivanka Trump, seemingly confirmed that her family owned dogs at one point. "I grew up always having dogs in the home, but we don't currently have one," she wrote on Twitter in January 2016. (There's a chance Ivanka was referring to Chappy here, but she didn't expand on any names.)

If Trump were ever to get a pet down the line, I have a feeling it won't be a canine based on his past insults. Indeed, Trump has a bad habit of calling his enemies a "dog," which I find personally offensive. Dogs don't deserve to have their good name tarnished, if you ask me.

Of course, there's always a chance Trump could change his mind on this issue. Maybe a dog is just what the president needs to help soften him up a bit.