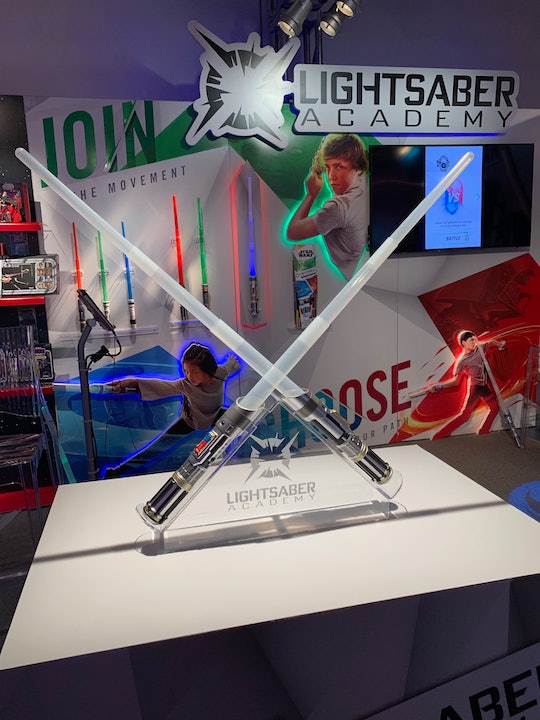 The Star Wars renaissance has brought so much to the world: the generation of Jedis for the new millennium, 3D rides at Disney World, more action figures than you can count... But the next big thing to come from a galaxy far far away is Hasbro's Star Wars Lightsaber Academy Interactive Training System, a combination of lightsaber toy and app that creates the most intense Jedi training experience since Rey took a trip to see Luke Skywalker.

Lightsaber toys aren't new; in fact, the first kid-friendly models came out in 1978 according to StarWars.com, just a year after Star Wars: A New Hope hit theaters and changed the sci-fi fantasy genre forever. Lightsaber tech has been evolving constantly since the '70s, but never before has there been something quite so advanced from George Lucas's universe as the Star Wars Lightsaber Academy Interactive Training System, the first of its kind that lets you train with five different Jedi or Sith Masters.

In the days of my childhood, the color of your lightsaber determined your master: If you grabbed a red one at Toys-R-Us, that meant you were team Darth Vader. But with this new version, Star Wars fans can switch between five different masters to train under by clicking the "Kyber" crystal hidden in the hilt (growing green in the photo below) for even more training fun. Each Master will teach your Jedi-in-the-making official Star Wars battle moves.

As cool as the ability to switch back and forth between the masters of the force is, the most exciting feature of the advanced lightsabers is their Smart-Hilt technology that takes the play to a whole new level. The swords of the future can connect to a smart device via Bluetooth, allowing your little Padawan to track their training progress and level up in the Lightsaber Academy app through AR play. They can literally see the moves they're making, and if you have two lightsabers (sold separately), your kiddo can battle their friends and see who has really been learning the most from the masters. All the movements of the lightsaber are saved on the toy itself rather than the app, so even if your child connects to a friend's app during a playdate, their training history will be stored. Check it out in the YouTube video from Dad Does below.

It's almost like being in the movie right? The sword features character voices, lights, and sounds that elevate the play, and app-connectivity makes Lightsaber Academy an interactive experience, giving your little ones hours of fun that will make them feel like they're actually in the Star Wars universe.

The toy and program are designed for kids 6+, and each lightsaber will sell for about $50 at most major retailers beginning in fall 2019. Your little Padawan will have to be a bit patient for the coolest Jedi toy around to be available, but they can have them in time for Star Wars: Episode IX, which hits theaters in December 2019.

More Like This
20 Stocking Stuffers For Kids Under $20
101 Advent Calendar Activities, From Books To Read To Cookies To Bake
13 Brilliant Gifts For Kids Obsessed With Music — Especially Singing Very Loudly
30 Great Non-Toy Gift Ideas For Kids