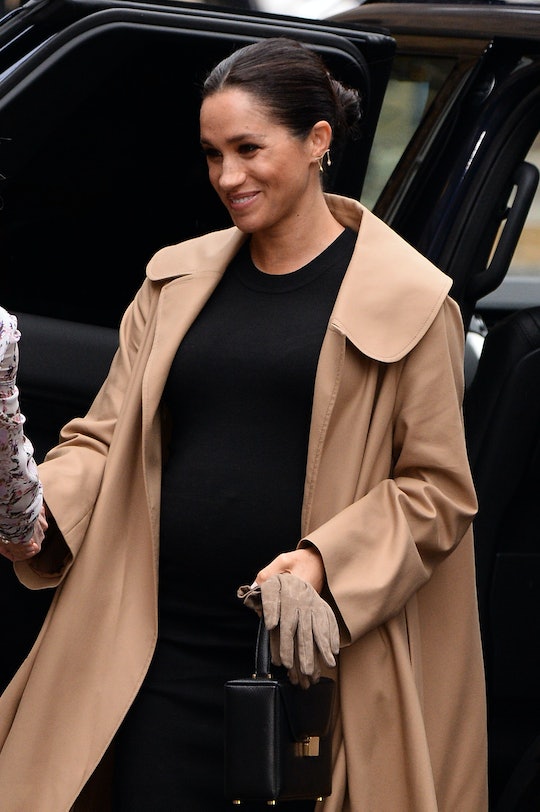 Meghan Markle's fashion sense has always been on point, but she seems to have kicked it up a notch since announcing her pregnancy. Now, there's some good news for any fellow expecting mamas looking to duplicate the Duchess's pregnancy style. Hatch, the maternity brand loved by Markle, is popping up in Nordstrom just in time for Mother's Day.

The line is now available for the first time in nine Nordstrom stores. It's the first major retail partnership for Hatch, and if I had to guess, I'd say it's no coincidence that it's happening on the heels of Meghan Markle being photographed all over the world in her Hatch favorites. The Daily Mail noted that the Duchess wore the Nearly Skinny Maternity Jean ($248) with a green army style coat on a recent tour of Morocco with Prince Harry. She also wore a black Eliza Dress ($218) with a camel trench during a visit to a UK charity called Smart Works, of which she is a royal patron, according to Harper's Bazaar.

Having one of the most famous women in the world be photographed wearing your clothes is a major deal for any fashion house. One brand saw a more than 2000 percent sales increase after Meghan wore it, according to Vanity Fair. While she may be giving Hatch a profit bump, the Duchess is far from the only celebrity obsessed with its offerings. Kerry Washington, Emily Blunt, Jessica Alba, and Amy Schumer have all rocked pieces from the line, according to People.

The Hatch Collection's goal is to banish frumpy frocks in favor of chic and stylish pants, tops, and dresses. It's designed to make women feel comfortable and stylish in pieces that work throughout pregnancy and beyond. An amazing feature on the Hatch website is the Bump Slider, which lets you see how select items fit on both pregnant and non-pregnant models. As someone who's got half a closet full of maternity castoffs that I no longer have a use for, the idea of pieces that work at any stage (before, during, and after pregnancy) is very intriguing.

That versatility could come in handy quite soon for Meghan. She's thought to be due near the end of April or early May, according to HELLO!'s royal editor Emily Nash. The royal couple is said to be planning to keep their little one's birth private, according to Elle, and won't be doing a photo call like the ones Prince William and Kate Middleton have done for all three of their kids. That means it could be a while before we see if Meghan continues to wear her Hatch outfits after her delivery — and before we get a glimpse of the new little prince or princess, of course.

If you're hoping to get your hands on Meghan's favorite Hatch pieces (or anything else the brand offers), but you can't make it to the Nordstrom pop up event before it ends on May 19, you can always check out the entire line at HatchCollection.com. You can also visit one of its two retail stores in New York and Los Angeles or browse and buy at ShopBop.com.

More Like This
The 16 Best Affordable Maternity PJs & Lingerie Sets On Amazon
The Cutest Petite Maternity Clothes From Amazon Under $40
From Sexy To Spooky, These Pregnant Halloween Costumes Will Make An Impression
Are Boy Babies Usually Late? Signs Your Baby May Be Born Late