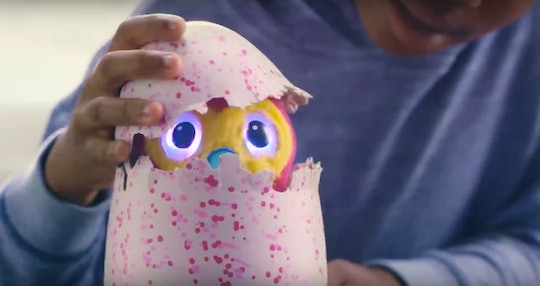 Hatchimals Shipment Will Hit Target Stores Dec. 11, So Parents Should Prepare For A Frenzy

With just 19 days left until Christmas, many parents are still on the hunt for this season's hottest — and most elusive — toy. The interactive creatures known as Hatchimals have been flying off shelves since their initial release in October, with some ending up in the hands of Amazon and eBay sellers asking for more than three times the suggested retail price of $59.99. If you're still empty-handed, don't despair: A Hatchimals shipment will hit Target next week, so you better start preparing now for the shopping frenzy ahead.

According to A Bullseye View, Target's corporate blog, each Target store across the country will be receiving dozens of Hatchimals beginning Sunday, Dec. 11, with additional inventory becoming available throughout the week. Supplies are limited, of course, so you might heed the advice of Mandy Nigbur, a stockbroker in Riverton, Utah, who arrived at her local Target at 4:45 a.m. on Friday and waited outside in 20-degree weather to get her hands on a Hatchimal, she told The New York Times:

'I haven’t decided if Mommy gets to be the star or if Santa will be the one who gets to bring it to her,' said Ms. Nigbur, who said she may be more excited about nabbing the product than her daughter will be to receive it.

Also starting Dec. 11, Hatchimal-themed GiftCards will be available in Target toy aisles in any dollar amount. Though the GiftCards don't reserve a Hatchimal, you can return to Target with your kiddo to buy one as soon as more arrive through the New Year and into January.

The unprecedented demand for Hatchimals caught creator Spin Master by surprise. The company's rushing distribution by airfreighting additional toys from factories in China, but the shortage is expected to continue. James Martin, head of global business at Spin Master, told The New York Times:

By all analyses, we thought we had enough. We had no idea that it would be this big. It's been exciting but it's also been daunting as we try to catch up and fill that demand.

Parents desperate to get their hands on one have resorted to entering Hatchimal raffles online or paying exorbitant prices through unauthorized third-party resellers. According to Bankrate, there were 27 bids on a $175 Hatchimals Penguala and 28 bids on a $172 Hatchimals Owlicorn on eBay in late November — and even those prices are on the lower end. No matter how desperate you may be, though, keep in mind that many Hatchimal resellers could be scammers.

Consider these tips from Get Safe Online to avoid getting scammed during your Hatchimal search this holiday season:

With a little common sense, you can make sure both parent and child wake up happy Christmas morning.