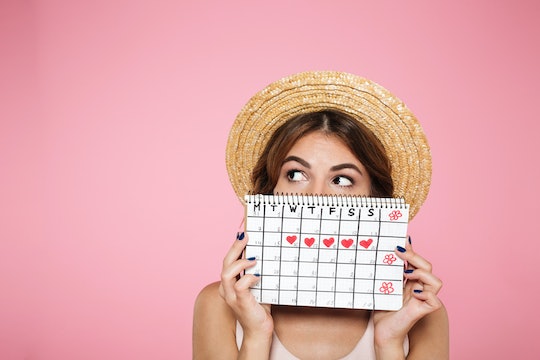 If you’ve recently had a baby, you already know one perk of pregnancy is not worrying about your period for the better part of a year. Unfortunately, after you deliver it will be back (sometimes with a vengeance). And to make things ever-so-lovely, there’s really no way to predict when Aunt Flow will return for her monthly visit. If you experience a delay in your postpartum period returning, trust me when I say that it can be really stressful.

Before you freak out about your postpartum period's seemingly "late" re-appearance, though, you should obtain some information about what’s actually going on in your body. According to Healthline, this is one area where your post-birth experience might be totally different from someone else's, and even different from your other pregnancies. The site explains that your first postpartum period should arrive about six to eight weeks after delivery, if you aren't breastfeeding. As OB-GYN Amina White, M.D. explains to Parents, if you are using both breast milk and formula to feed your baby, your post-baby period will likely come later, and if you are breastfeeding exclusively you might not get have your period until after you wean your baby. Planned Parenthood explains that exclusive breastfeeding can actually stop your body from ovulating, which means it also stops your period from returning (at least for a little while).

According to Healthline, when you get your first postpartum period depends on a variety of factors, including your body, hormone levels, and how you feed your baby. While formula-feeding moms will probably get their period back within six to eight weeks after birth, White explains to Parents that breastfeeding moms might not have a postpartum period until much later, when their baby starts eating solids or nursing less, and might not menstruate until after they stop breastfeeding entirely.

According to Planned Parenthood, and because exclusive breastfeeding can stop ovulation, nursing might also delay your postpartum period from returning. This experience — called lactational amenorrhea — can actually be up to 98 percent effective as a method of birth control, for up to six months after delivery. The same site warns, however, that this is only the case if you breastfeed exclusively — meaning your baby eats no other beverages or foods — and may only be effective if your baby nurses or you express breast milk at least every four to six hours around the clock. If not, you should definitely ask your provider about other postpartum birth control options

Speaking of birth control, Planned Parenthood notes that some forms of birth control, including hormonal intrauterine devices (IUDs), birth control implants, the birth control shot, and the progestin-only "mini pill," can cause some people to stop having their period, have irregular periods, or spot in between their normal monthly cycle. So, if you started one of these forms of birth control after delivery, it might be the reason why you haven't started your period on schedule. However, as with any medication side effect, your mileage may vary, which can suck if you are worried about preventing pregnancy or ruining you favorite pair of underwear.

To complicate things, Healthline notes that your monthly cycle might also be completely different after having a baby, at least for a while. It might be shorter, longer, heavier, or lighter than it was before, all due to fluctuating hormone levels and your body's recovery from pregnancy and childbirth. So your delayed period might be perfectly normal, or it might be a sign of something that requires medical attention, which is so frustrating.

If you've ruled out other causes of your delayed period, and you've had unprotected sex since your baby was born, you might just want to take a pregnancy test. According to BabyCenter you can get pregnant before your postpartum period returns, because ovulation happens about two weeks before menstruation. If you have any other early pregnancy symptoms, like nausea or tender breasts, pregnancy might be the reason for your delayed period. The same site notes that if you aren't breastfeeding, and your period hasn't returned by three-months postpartum, you should definitely check with your doctor to make sure nothing serious is going on.