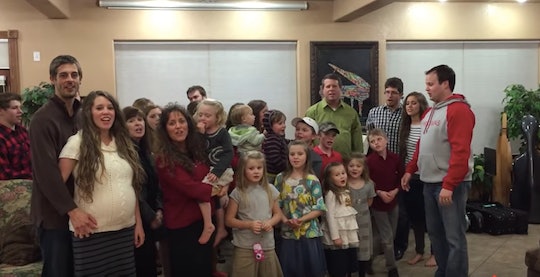 Have Any Of The Duggars Divorced? Here's What We Know

Throughout the past few years, there have been *a ton* of Duggar weddings. Love is definitely in the air, to say the least, and you never know when another Duggar courtship or engagement will spring up. Amid all the nuptials and relationship news, however, some fans are wondering if any of the Duggars have called it quits on their marriage. Considering divorce is quite common in America, it's definitely a legitimate question. So, have any of the Duggars divorced? As surprising as it may be given the family's conservative background, there are a few people in the Duggar fam who have ended their marriage.

It's no secret that most of the Duggars are against divorce. In fact, Jill Duggar and her husband, Derick Dillard, are in a covenant marriage. If you're not familiar with the term (I wasn't up until a few months ago), it's a distinct type of marriage that makes it more difficult for two people to divorce. Covenant marriages are only recognized in three states (Arkansas, Louisiana, and Arizona), according to The Spruce, and there has to be a specific reason for a divorce to be granted (falling out of love is not acceptable, for example).

Not to mention, divorce is frowned upon by The Institute in Basic Life Principles, teachings that Jim Bob and Michelle follow. In fact, a great chunk of IBLP's website is dedicated to making a marriage work at all costs.

And ladies, if you do end up getting divorced, don't worry about who you'll be "accountable" to now that you're husband is out of the picture. "Since you are no longer accountable to a husband, God fulfills the role of Husband in your circumstances," IBLP's website advises divorced women.

Of course, there's nothing wrong with wanting to make a marriage work or being married. But, as many people out there already know, things don't always work out. Just ask Jim Bob's sister, Deanna Duggar. Yep, Deanna and her husband, Terry Jordan, filed for divorce in December 2015, according to ET Online. Although it's not clear if the divorce was ever finalized, they definitely made the move to formally end their marriage.

Amy King, Deanna's daughter and 19 Kids & Counting alum, opened up about her parents split shortly after the news broke. King revealed, according to Us Weekly:

They have had an on/off relationship for a long time. It's sad they can't be a team. The divorce papers came, and my dad told me through a text on Christmas. I don't think he meant to, he just didn't know what to do. I was devastated. It hit me so hard.

Interestingly enough, Deanna isn't the only Duggar to have divorced their spouse. Anna Duggar's sister, Rebekah McDonald, divorced her husband, Joshua McDonald, in 2015, according to Radar Online. And although McDonald isn't technically a Duggar, it's worth noting given her relationship with Anna. When Josh Duggar admitted to cheating on Anna in August 2015, many fans thought she'd consider divorce because McDonald took the plunge. It appears, however, that Anna views about divorce might be different than her sister's.

So, I think the main takeaway here is that while a Duggar divorce is possible, it's not common or even encouraged.