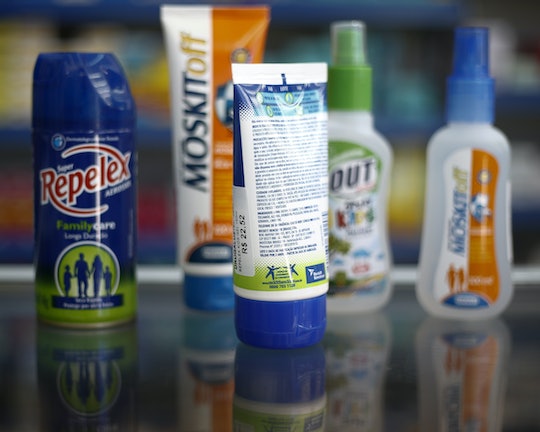 Have Bug Repellent Guidelines For Pregnant Women Changed Since The Zika Outbreak?

Mosquito season is on its way. With warm weather starting to roll in, you might be wondering how to best protect yourself against the feared Zika virus. Health officials have already called the virus outbreak an international emergency — one that's been hitting Central and South America the hardest — as it’s been linked to serious birth defects that include microcephaly, which that can result in newborns with abnormally small heads and underdeveloped brains. Zika appears to be especially dangerous for pregnant women and experts say the virus is likely going to make its way into the United States next. Wearing long sleeves, not traveling to Zika affected regions, and wearing bug repellent are just a few of the simpler ways to protect yourself from the virus. However, things are always a little different for expectant moms. As Zika continues to make headlines you may be wondering if bug repellent guidelines for pregnant women have changed since the Zika outbreak.

The good news is that things haven’t changed too much, except the need for repellent has increased in recent months. You might be thinking you need to strongest and toxic repellent to keep mosquitoes at bay during the summer, but the Environmental Protection Agency (EPA) has put together a list of insect repellents that are proven safe and effective for pregnant and breastfeeding women that won't do damage to you or your bun in the oven. Common brands like Cutter and Off! as well as drugstore repellents are among the listed options. The Centers for Disease Control (CDC) also backs this, as long as they're used properly.

When you’re choosing your bug spray look for products containing the active ingredients DEET, Picaridin, or IR3535. All offer safe and long-lasting protection. More natural options like oil of lemon eucalyptus (para-menthane-diol) are just as safe, but don’t last as long. Citronella products, like oils, candles and plants, are known to shoo mosquitoes away and they are also considered safe to use while you’re expecting. Permethrin products are also safe to use, but are not be used on your skin. It’s safe and effective when used on clothing, shoes, bed nets, and camping gear.

In an interview with Fit Pregnancy, genetic counselor Lori Wolfe recommends using the stronger repellents only in small amounts. “The stronger, more effective brands are those that contain DEET, but they do have some toxic capacity,” Wolfe told Fit Pregnancy. Wolfe recommends a better and safer option to is wear long-sleeved shirts and long pants and then apply the repellent to your clothes and pat a bit on any exposed skin, such as your wrists, neck, and face.

In addition to using bug repellents and staying covered up as much as possible in the hot summer months, the CDC also recommends pregnant women stay in places with air conditioning and windows or door screens to keep the mosquitoes outside. Also be sure to rid any standing water from your yard or stay away altogether as these little pools are prime area for mosquito breeding.

The threat of Zika in the United states is worrisome and health officials have admitted that it's scarier than they initially anticipated. A pregnant mind is already overloading with questions and worries, so staying informed and using bug repellent as directed is a simple way ease at least one source of stress.