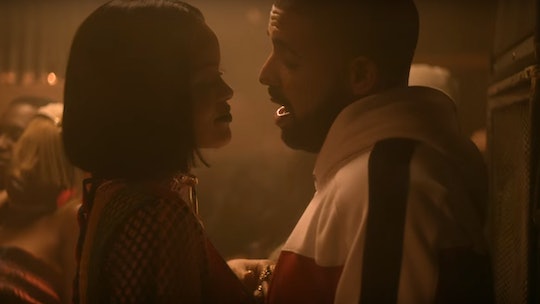 Have Rihanna & Drake Ever Hooked Up? They Seem To Have A Romantic Past

There's no question: Rihanna and Drake look good together. In the video for "Work," the two are seriously hot as they get cozy on the dance floor. Have Rihanna and Drake ever hooked up in real life? They definitely seem to have been an item in the past.

Rihanna and Drake's relationship goes all the way back to 2009, according to POPSUGAR. The two kissed at Lucky Strike bowling alley when Drake was just emerging as a rapper. In 2010, Drake told The New York Times that his relationship with Rihanna didn't last. Professionally, the two reunited to release "What's My Name?," with both starring in the music video and performing at the Grammys, POPSUGAR reported. Though Rihanna and Chris Brown seemed to reconnect off and on over the next few years personally, Drake and Rihanna formally duetted on "Take Care" in 2012.

By 2014, it seemed as though things had fizzled out between the two stars. In an interview with Rolling Stone, Drake said he thought of Rihanna as a friend:

She's the ultimate fantasy. I mean, I think about it. Like, 'Man, that would be good.' We have fun together, she's cool and shit. But we're just friends. That's my dog for life.

Over the next few months, the two appeared to go on several dates together, POPSUGAR reported. In 2015, Rihanna appeared to strike up a romance with rapper Travis Scott while Drake connected with Serena Williams. In October 2015, Rihanna said that Brown was her most recent "official boyfriend," making it seem as though her relationship with Drake was mostly casual.

Now, "Work" is topping the Billboard Hot 100 for the second week in a row, and fans are flipping for the steamy video. Could Drake and Rihanna be back on? It seems unlikely. Rihanna said she was single during a February appearance on The Ellen DeGeneres Show, according to Billboard:

I'm single right now and it's not that I'm like, 'Oh, pro-single, yes, I hate men!' I just think I have so much on my plate that I can't even find the time to entertain a steady relationship or anything serious. Or even a text.

For now, fans will just have to live vicariously through the "Work" video (and through Rihanna and Drake's performance at the 2016 BRIT Awards). Because even if they're not together IRL, it's awesome that Rihanna and Drake are still making beautiful music together.