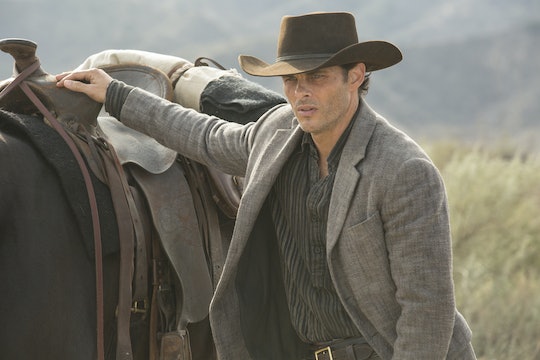 Have Teddy & William Been In The Same 'Westworld' Scene Together? It Could Mean Something

Theories abound when it comes to HBO's Westworld. The show is a complicated one and it's set in a world where nothing is quite as it seems, which makes it feel like anything is possible. There are connections between characters that may be unrevealed yet and fans are certainly scrambling to try and connect the dots before the show finally starts answering its own questions. One theory involves a presumed connection between host Teddy Flood and guests William and the Man in Black. All three appear to have something in common, from their quests into the dark underbelly of Westworld to their interest in Dolores. So is there some kind of connection between them? Have Teddy and William been in the same Westworld scene together?

To understand why the answer to that may be significant, one has to be familiar with one of the biggest Westworld theories out there. One popular theory posits that William and the Man in Black are actually the same person and the show is exploring two different timeline with them: the start and the end. William entered the park naive and well-intentioned, but may become so changed by his experience within it that he transforms into the cruel, violent Man in Black. This could be supported by the fact that Teddy and William have not had any scenes together since it may be an indicator as to which timeline is which.

The fact that neither Teddy nor other characters like Maeve appear in William's storyline makes it seem as though it could have happened years earlier, and is even a precursor for what's happening now in the park in the present-day. Teddy missing from William's storyline is especially suspicious because he's of such great importance to Dolores' loop; he acts as her love interest and even her guard, intended by the technicians of the park to keep her from leaving the ranch. So now that she's been spending her time with William, one has to wonder why Teddy isn't part of all that. And while I'm on the subject, why is it so important to keep Dolores on her loop in the first place, even assigning another host to make sure she stays put? Perhaps because thirty years ago she escaped her loop with William and it caused a major problem.

Some even think Teddy is based on or inspired by William, as suggested by Reddit user Shenjee1. "The Adversary" made it clear with the introduction of Ford's robot family that the creation of hosts can take inspiration from real people. Teddy and Dolores had the exact same meet cute that she had with William, where she dropped her can and he picked it up for her. And if the Man in Black is as important to the park as he seems (he references having "saved" it in the past and he's also allowed to do whatever he wants), then it's also equally possible for him to have inspired a character or narrative within it as well, adding further fuel to the fire that William and the Man in Black could be one in the same.

In the pilot, the Man in Black openly wondered why the park would make two hosts fall in love with each other, then decided it's so guests can have someone to triumph over: defeating Teddy and taking his girl is part of the story. But perhaps there is something more metaphorical to it; perhaps the Man in Black's "defeat" of Teddy ties into his own story. Maybe it references how he destroyed his younger, naive self and built his identity as the Man in Black in its place. There are all those hints that the noble Teddy has something dark lurking in him, much like the seemingly-kind William might if he becomes the Man in Black as many suspect. One could have inspired the other.

It could also explain the cavalier way the Man in Black discusses the hosts' own nature with them, breaking the immersion of the game to see if any of it will trigger them to become self-aware in the way Dolores seemed to with him all those years ago.