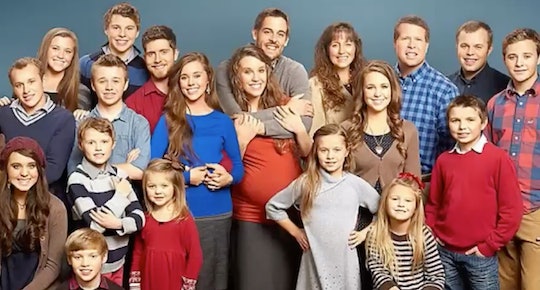 For more than seven years, television viewers followed the supersized Duggar family as they expanded from an already-impressive brood of 14 kids in their early reality show days, to 19 children after the birth of their youngest, Josie, in 2009. With the arrival of a number of Duggar grandkids in recent years though, it seemed reasonable to assume that Jim Bob and Michelle's youngest child would be their last — but that's not exactly how it's worked out. Have the Duggars adopted a child? There may not be anymore pregnancy announcements to come in the couple's future, but in November 2016, Jim Bob and Michelle were named the permanent guardians of their great-nephew, 9-year-old Tyler Duggar, according to Entertainment Tonight.

In August 2016, Jim Bob and Michelle filed an emergency petition to gain temporary guardianship over the boy from his mother, Rachel Hutchins, who is Michelle Duggar's niece. According to court documents obtained by ET, the Duggars' lawyer claimed that Hutchins was "unable to meet Tyler’s health, safety, and other needs," and the judge ruled in the Duggars' favor. According to In Touch Weekly, Tyler had reportedly been under the care of his grandmother — Michelle's sister, Carolyn — as of 2015, but recent health issues were keeping her from being able to continue to care for him. According to ET, Hutchins is said to have agreed to Michelle and Jim Bob's guardianship request, which reportedly allows her supervised visits with her son.

In a post on the Duggar family website in January, the Duggars confirmed that they had taken Tyler "under their wings," and that he was a member of Michelle's extended family. The post featured two photos of the boy, who looked to be enjoying life in his new home, but the Duggars declined to share further specifics to protect the young boy's privacy. Since most of the younger Duggar children are no longer regularly on TV now that the family's original show, 19 Kids and Counting is off the air (a spin-off, Counting On, primarily follows the lives of the older siblings and their spouses and children), keeping him out of the spotlight hasn't exactly been very hard. But that doesn't mean that the family hasn't been including him in family updates: in February, the Duggars dedicated a sweet post to Tyler on Facebook in honor of his 9th birthday, and he's also started to make appearances on the Duggar's Instagram pages, too.

In the Facebook post, Jim Bob and Michelle shared a photo of Tyler's birthday dinner, and wrote, "We are so glad to have you in our home and a part of our family! Your bright smile and sweet spirit brings much joy to us all!" The couple also highlighted the special bond that seems to have formed between Tyler and 13-year-old Jackson Duggar — the Duggars wrote that Jackson "loves having a 'little brother/cousin' to ride bikes and play with," and added that they pray that "God will use [Tyler's] life in a great way."

And Tyler also appeared in the Duggar family's Thanksgiving day photo (though with so many people sitting on that staircase, you'd definitely be forgiven for not noticing!).

Most recently, Tyler also popped up in a photo on Josiah Duggar's Instagram page, where it looked like he was definitely enjoying the snow that had fallen outside the Duggars' Arkansas home.

While Tyler's new permanent living arrangement must have been a big transition, The Daily Mail reported that, actually, he and Hutchins have long been close to the Duggar family. Photos from Hutchins' Facebook page show her happily posing for selfies with Michelle and Jill Duggar during holiday family gatherings at the Duggar home, and in another photo, Hutchins, Tyler, and her mom Carolyn were snapped alongside Michelle and five of the older Duggar daughters.

Though Hutchins seems to have a good relationship with her family, she has reportedly struggled a great deal personally, and is currently said to be unemployed and on probation after she was arrested and charged with felony breaking and entering, according to The Daily Mail (Hutchins did not immediately return Romper's request for comment). As for Tyler, the fact that the Duggars were given permanent guardianship — along with the fact that he's now named Tyler Duggar and not Tyler Hutchins — seems like a pretty clear indication that there are no plans for him to return to living with his mother in the future, regardless of her situation.

Although Tyler's arrival into the Duggar family may not have been something that Jim Bob and Michelle anticipated, it seems to be working out well for the couple who have always maintained that they'd be happy to continue welcoming more children into the fold. And if the photos on social media are anything to go by, Tyler seems to be pretty happy with the arrangement too — even if it meant gaining 19 new brothers and sisters overnight.