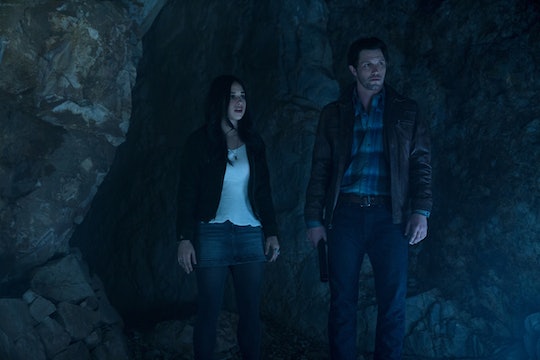 The CW’s new series, Roswell, New Mexico, tells the story of a woman who revisits her hometown of Roswell to find out that her teenage love is actually an alien. The show is centered around a town with a rich history of UFO and alien sightings, and while you may have seen plenty of fictional Roswell stories on TV, you may be wondering, have there been real UFO sightings in New Mexico?

It turns out that there have been a number of UFO sightings in New Mexico over the years, and according to news station, KRQE, the odds of seeing a UFO in the state are 332-to-1. The National UFO Reporting Center State Report Index For New Mexico has a list of sightings throughout the state since 1998, which include details on time, duration, location, and descriptions on what was seen.

But while people in New Mexico continue to report UFO sightings, there’s no question that the most famous sighting in the state was the 1947 UFO crash in Roswell, which ended up turning the city into a mecca for all things alien. According to History, in the summer of 1947, a rancher named Mac Brazel found a foil-like material, metallic sticks, chunks of plastic, and foil reflectors sprawled across his farm. Brazel called the Roswell sheriff to report the debris, which was eventually carried away in armored trucks by officials from the Roswell Army Air Force Base.

After the crash, rumors began swirling about its extraterrestrial origin, with news headlines describing it as an alien UFO that the US government was hiding and experimenting on. In an interview with the Smithsonian, Roger Launius, a retired curator of space history at the Smithsonian’s National Air and Space Museum, explained that the crashed vehicle was actually a reconnaissance balloon that the US government was testing on the heels of World War II.

He said that the balloon was part of Project Mogul — an operation in which the government was sending high-altitude balloons fitted with microphones into the sky in order to intercept sound waves created by potential Soviet nuclear tests. Launius noted that at the time of the crash, the government did not want to reveal any information regarding the project, so they never denied that it was a UFO.

“Apparently, it was better from the Air Force’s perspective that there was a crashed ‘alien’ spacecraft out there than to tell the truth,” said Launius. “A flying saucer was easier to admit than Project Mogul.” He explained that after the crash, UFO hysteria spread, and by the end of 1947, there were more than 300 alleged “flying saucer” sightings throughout the country with no credible evidence to support them.

Launius added that people continue to see UFOs in the sky, but it doesn’t mean that they are alien. “UFOs aren’t unusual, they’re simply unidentified things you see in the sky,” he told the outlet. “We’ve all probably seen them. And, if you look long enough, you’ll probably eventually figure out what it is you’re looking at. It’s not extraterrestrials.”

In 1994, the Pentagon declassified a report which confirmed that the 1947 crash was a balloon from Project Mogul, but it hasn't stopped Roswell from becoming the center of focus for a plethora of extraterrestrial stories, including Roswell, New Mexico. But whether you believe in aliens or not, you have to admit, it’s still pretty fascinating to look up at the sky and wonder.