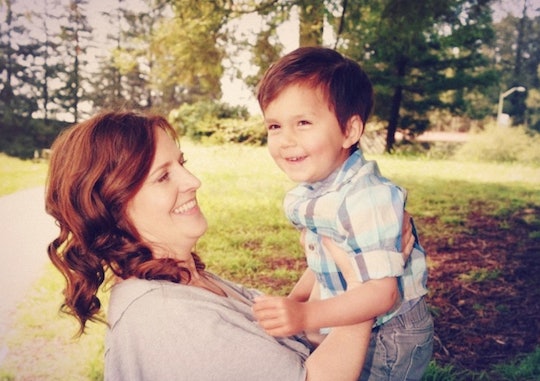 “I Just Wanted A Family”: The Women Who Get Pregnant On Their Own

“It wasn’t an easy choice. I’d characterize it as fairly anguished choice.”

Sarah Kowalski, a writer and mother in Berkeley, California, is talking about her decision to have a baby alone as she approached age 40.

Once Kowalski finally made the choice, she embraced it wholeheartedly. “All the anguish faded into the background and I wondered why it had been so hard to choose to do it alone,” she says. “Now that I am a mother to a 4-year old boy, I think being a single mother is a fabulous option. I wish more women considered it a Plan A, rather than a back-up plan that feels second-rate.”

Kowalski is one of many women choosing to undertake pregnancy and motherhood on their own.

In 1981, Jane Mattes, L.C.S.W., a psychotherapist who became a parent on her own, founded a membership organization and resource called Single Mothers By Choice, which has served over 30,000 women since its inception.

The organization’s primary purpose is to provide strong peer support and information to women who are considering, or have chosen, single motherhood, knowing — at least at the outset — that they will be the sole parent.

So what is it like to set out to parent on your own?

“I have no idea what inspired me to take this path, which is completely crazy, because it’s a really hard committed path, and I’ve fought for it,” Tessa Wills, an artist in San Francisco who is currently pregnant with her first child after IVF treatment, tells Romper. “I guess some part is mysterious about how I’ve ended up here, and I’m learning to make peace with that. At the same time, I know that I just want a family, and it’s that simple.”

I obviously needed to use a sperm donor. The shock came when I realized I would also need to use an egg donor in order to conceive and carry a pregnancy.

Harmony Niles, a mother of one in San Francisco, says she was ambivalent about motherhood until the age of 35. She was in Barcelona watching a group of kids playing kickball in a plaza while their moms stood together and chatted when she realized her desire to have children of her own.

“It felt like a movie director’s perfect scene to illustrate the joys of childhood — and in this historic, picturesque setting! I felt so much happiness watching them play, and a desire to join the group of mothers. It must have been the perfect storm of feelings: the nostalgia inherent in the plaza, the aliveness of the children, and my longing for community and connection with other women.”

Niles tells me that it was on that trip that she realized that the “freedom” that had been so important to her when she was younger had played itself out. “I remember having this thought: it’s OK if I can never come back here.” It was the moment she decided to get pregnant on her own.

Kowalski, who wrote a book about her journey toward single parenthood, Motherhood Reimagined: When Becoming A Mother Doesn't Go As Planned, initially mourned the idea of having a child with a partner before moving onto the logistics of doing it solo.

“I obviously needed to use a sperm donor. The shock came when I realized I would also need to use an egg donor in order to conceive and carry a pregnancy,” she says of her issues with infertility. “Again, I felt like I had failed at a basic aspect of womanhood and had to mourn the loss.”

Kowalski says that going through infertility alone — she had challenges conceiving through sperm donor insemination, before deciding on an egg donor and IVF treatments and procedures — meant she had to make all the decisions herself.

“There was no one else in the picture weighing in with their opinions. And this has positive and negative aspects. I didn’t have to worry about someone else’s desires, fears and wishes. I never had to compromise for someone else, and yet I had no one else truly invested in the process to work things through with.”

When Kowalski was making the choice to be a single mom she thought she was an outlier — that not many women made this choice — so she relied mainly on friends she already knew for support. “It wasn’t until I was pregnant that I tapped into the many wonderful communities of single moms by choice out there,” she recalls. “And now I run my own groups and communities for women at any stage of the journey to single motherhood.”

We agreed to end our relationship amicably so I could concentrate on the next era of my life… And then I got pregnant by accident the last time I had sex with him.

Pursuing solo pregnancy or motherhood as a woman without a partner can present a whole set of challenges and questions.

Before Niles approached the physical aspects of conception, she immersed herself in the logistical details of solo parenting, researching online budgets for raising a baby and deciding she could afford the cost. She upgraded her insurance and had a certain degree of confidence in taking on solo parenting, as her mother and all of her sisters had been single mothers.

“When I was young, daydreaming of the future, I had pictured me and my daughter, just the two of us, BFFs, taking on the world,” she recalls.

Niles started to share her dream with everyone she knew. “Over coffee, friends would ask me, ‘How are you?’ and I would answer, ‘I want to have a baby!’ I told semi-random people. I even told men while on a first date, ‘I want to get pregnant so you should probably steer clear of me.’”

Niles was in a casual relationship with one guy who she had shared her pregnancy plans with. She spoke with him about how she was ready to pursue becoming a mother and that she had recently gone off her birth control pill to return to reproductive normalcy.

“He was supportive and we agreed to end our relationship amicably so I could concentrate on the next era of my life… And then I got pregnant by accident the last time I had sex with him.”

For Niles, the questions of how to pursue solo pregnancy and parenthood were no longer an issue.

“He is not the man I would have chosen, but I’ve made peace with it and our daughter is perfect,” she says.

Single parenthood and dating often go side by side.

Kowalski says that although dating was a welcome distraction, she felt like she had this huge piece of relevant information that she needed to share.

“I spent hours debating when and if to tell. When was too soon to tell? I was involved in one of the most significant experiences of my life so not disclosing it felt truly bizarre. I went back and forth more times than I care to admit.”

Wills found that it wasn’t her dates who had an issue with her choice to pursue single parenthood.

“I found that I had a kind of internalized belief that people would stay away from me because they would have massive commitment-phobia, but I found the opposite, weirdly, and in the end, it’s me who didn’t move forward.”

She says that, coming off a breakup, she realized she didn’t have the “bandwidth” for a relationship at the same time as she prepared to start a family.

Kowalski says she did tell one person that she had been dating on and off for a long time about her pregnancy. “I was worried that I’d scare him off, but instead he loved that it was an out-of-the-box and courageous choice.”

So what happens when your dreams come true and you become a parent?

As a woman who grew up surrounded by single mothers, Niles had no trouble envisioning herself mothering on her own, but says she didn’t realize just how challenging the realities of solo parenting would be until she was in the throes of it.

“I believed that because my mother and aunts had managed it when they were young and broke, then I, older and better resourced, would have an easier time. Not true. It’s very challenging and I’m constantly confronting all of my insecurities, while feeling very, very alone.”

Niles goes on to say, “I am grateful that I get to make all of the decisions though. It helps me pretend that I’m in control.”

As I watch so many friends get divorced and struggle through custody battles, I’m reminded of the many reasons that make separating baby-making from partnership a wonderful idea.

Being solely responsible for parenting decisions ultimately appeals to Kowalski. “All of the choices are mine to make. I don't envy people who have to agree about discipline styles or choice of schools, and I find it mind-boggling sometimes to handle it all on my own.“

For Kowalski, motherhood and a partnership needn’t be prerequisites for each other; nor do they remain entwined regardless of the path you take.

“As I watch so many friends get divorced and struggle through custody battles, I’m reminded of the many reasons that make separating baby-making from partnership a wonderful idea.”

In compassionate parenting and motherhood there are no failures, just different ways at arriving in that beautiful bond between parent and child.

“Choosing to parent without a partner does not mean that you in any way failed,” says Kowalski. “Instead, try to see it as an empowering choice that you are lucky to be able to make.”