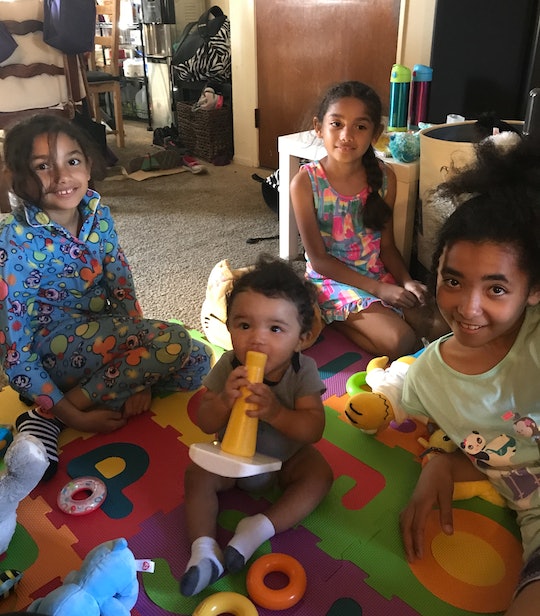 I'll Say It: Having Kids Gave My Life A Purpose

I started having kids young. Not teen-mom young, but I guess young by today's standards. I didn't have a great career established, other than a few acting roles I'd done in high school and college. I got engaged at 22, married at 23 and had my first child, a girl, Anneka, at 25. When she was born, everything changed. My outlook on life changed. I no longer felt as if it were "me against the world." I didn't feel like the rebellious teen who wore only black clothing to upset my mother. Having a baby gave my life purpose. When Anneka was born, I felt as if life had been breathed into me. There was a magic, a resonance, that wasn't there before.

We are in less of a hurry to have children these days. Between 2000 and 2014, the median age of a woman when she had her first child rose from 24.9 to 26.3 — a statistically powerful change per the CDC. We put off children because we want to travel, to establish careers, to buy homes, to find ourselves. The unspoken element of that trend is that many people don't see meaning in parenthood itself. As Kylie Jenner's friend Jordyn said in the video celebrating Jenner's pregnancy and birth, Jenner always wanted to be a mom — a motivation that none of those who shamed her for having a baby young considered.

I have to admit that my life was severely lacking when I found out I was pregnant with my daughter. My husband and I lived in an extremely small apartment on the south side of Chicago in a bad neighborhood. Not once, but twice our vehicle was broken into. Someone even tried to break into our apartment while I was home alone and pregnant with Anneka. Once she was born, we ran to the suburbs, which was substantially safer, albeit too quiet boring for us both. We often ran to the city from time to time to visit museums, shop, visit family and just to get out of the quiet of our suburbs.

Looking back on it, I didn't even know who I was, so how was I raising a child? What wisdom could I honestly impart? But as time went on, I embraced motherhood more and more. I fell into the role of mommy easily. I was the mom who scheduled my days, pre-planned meals and sang along to Sesame Street songs. My joy was my child. All of the struggles and pain I'd had growing up in my rough neighborhood and all of the things that I experienced as a child were just a distant memory because all of my focus was on making sure Anneka's life was vastly better.

My outlook on life has changed wildly for the better. I've become kinder, sweeter. My focus has changed. I'm raising my kids to be good people, above all else.

When I was 28, I gave birth to twins, two little girls, Mia and Laila. Yes, life got harder as I was now mother to three girls under the age of 3(!). Anneka was as helpful as possible with her sisters and even called them "her babies." I was lucky that Anneka was such a calm child who was not only smart, but rarely ever pitched tantrums or whined. Just last year, I gave birth to my fourth (and last) child, a boy named Kai.

Perhaps now I feel as if my life is full because it is. There are always things to do and not as much time to sit around and wonder "where is my life going?" Of course, I still have those moments when I question my life choices. Perhaps I should've had Kai sooner so I could go out and continue my career. Since moving to Los Angeles six years ago from Chicago with my husband and three girls in tow, I've done small acting roles, including a couple of plays, and have written for several websites. But my main role has been mom. There are times when I go do stand-up comedy shows and then rush back home because I want to be home in time to put my kids to bed. Just recently, I even turned down a gig because it was late at night and I knew I'd have trouble being mentally present for the kids the next day while their father was at work. Besides, I wouldn't be there to put them to bed.

The story that the world wants to tell is that babies ruin you. But ever since I had my children, my outlook on life has changed wildly for the better. I've become kinder, sweeter. My focus has changed. I'm raising my kids to be good people, above all else. I want them to be happy — strong and healthy also, but kindness matters greatly in my household. My daughters are best friends and I don't allow them to say mean words towards one another. My focus has changed to always think of my kids first, and how things could possibly affect them. My thoughts of them determine where we live to stay close to the school they love.

And importantly, my children are my best friends. They cheer me up even when they don't know that I need cheering up. I give them so much love, in a way that I didn't know love like that was possible. It's a different kind of love than I feel for my husband, of course.

Now that they are 11, 8 and 1, respectively, they aren't just my children. They are these incredible people with thoughts and feelings. They never fail to amaze me. They continually remind me of the sacrifices myself and their father have made to ensure they have better lives than we did growing up. You want to improve your kids' lives over yours, and I feel as if we've done just that so far. We've taught them positivity and love. They are kind, caring children and I'm quite proud of that fact.

By saying that my life began when I had a kid, I just truly meant I didn't feel fully alive until I looked into Anneka's eyes. I had a new purpose, someone to live for, someone to fight for. I had someone more important than myself who needed me regardless of whether I had feelings of weakness or distraught. I would fight to have a better life for her and I can honestly say I didn't fight for my own happiness until she gave me reason to. All of the things I did before that, they were just to prepare me for the most important role I'd take on: to be Anneka, Mia, Laila and Kai's mother.