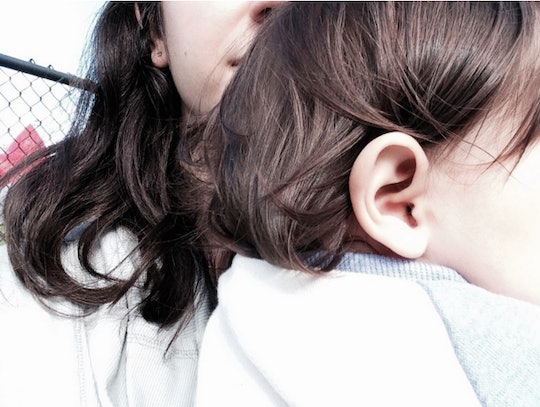 Having A Baby Helped Me Find Myself

Avoid slipping on the ice, lock the car, pull the scarf up, remember the security code: it all went through my mind in the 30 seconds it took to walk from my car into the radio station, where I worked at the time. It was always pitch black and windy at 4 in the morning, some days far colder than others. That early in the morning it’s impossible to do any reporting that requires interviews, so I began voicing over the stories from the day before. I talked out loud to my baby in-utero to warm up my voice. I smiled big, enunciated every syllable. I said my last name over and over until it sounded weird.

That was my life.

Six months earlier, I dropped my husband off on campus for his first day as a Ph.D. student and went straight to Walmart to buy a pregnancy test. I saw the positive result and sat unmoving on my couch for a long time. I had a shiny new journalism degree. My husband and I had moved to a new town far away from anyone we knew less than six weeks ago. And I was pregnant.

Back at the radio station, I tried to sound friendly as I recorded my last few stories. After that was over, I scooped up my stuff and was out the door in seconds. When I first got the job, I cried tears of joy and relief. It was only part-time, $5 less per hour than my last job, but I was so glad to just have something, to finally be done searching, to have settled down somewhat; to have an answer when people asked me, “And what do you do?” I planned to return to work after my baby was born and my bosses encouraged me to take as much time off as I wanted.

Then Henry was born, and I realized pretty quickly I wouldn’t go back. The money wasn’t enough, and a 4 to 10 a.m. schedule was disruptive, not to mention impractical. More than money or scheduling though, I didn’t want to waste another minute at a boring, dead-end job. I didn’t want to be a radio anchor; I never had. I wanted to write and edit.

For the first five months of Henry’s life, I basically just stared at him and thought about what was important to me. His eyes, opening and shutting. His rounded belly and lean legs. Once we got past the terrifying newborn period, we went on walks and took naps and nursed a lot. It was cleansing, as much for him as it was for me. It gave me time. It gave me peace. Most of all, it gave me room to question what I wanted to happen next.

The secret I had been blind to was that I had all of the pieces already. The journalism degree, work experience, freelancer friends. I just needed to decide that I wanted to do it and find the right motivation. Bylines are great, but they can’t be the early motivation because they are few and far between. Having Henry solidified my dreams by giving me a living, breathing reason to be better, become more productive, and be happier. The first trimester of my pregnancy was a time I felt most lost in my life. I didn’t write, I went on disappointing interviews, I felt out of place. I saw the radio job as a quick fix to my problems, but once Henry was born I realized I didn’t want the quick fix. I wanted to build something unique and lasting.

When Henry was 6 months old a friend of mine started a feminist zine and asked me for some help. I wrote a short piece for the first issue, and I really enjoyed it. From there, I applied to at least 50 places before I got my first blogging job. I volunteered to edit and write the newsletter for a local farm. Then I applied to 50 more places. The work came slowly and steadily. There were hiccups, but they didn’t hold me back. They were waves leading me out into the current, pushing me forward and forward, directing me where I wanted to be.

Before Henry, fear of striking out on my own held me back from working as a writer. I didn’t see it because I was so wrapped up in moving or looking for jobs, but becoming a mother made me slow down and evaluate how I wanted to spend my time. I didn’t want to pilfer away at a ho-hum job. My time was valuable. Shortly after Henry was delivered, I began bleeding unexpectedly. I remember not being afraid. I was calm. I never wanted to die, but I felt that if that was my last moment, right there on that bed with my son in my arms, that would be enough, that would be OK. It was a turning point for me. I didn’t have time to spend on things that didn’t bring me peace, that didn’t give me calm. I didn’t have time for things that didn’t matter. I was on a dual adventure: to raise my son, and to find myself.

It’s easy to think that after you find yourself, it gets easier. But it doesn’t. That’s the tough news. A career that gives you joy and brings you peace also brings you deadlines, headaches, frustrations, and failures. I was thrown for a loop recently when I saw a full-time remote opportunity that sounded awesome. But how would I do it? Who would take care of Henry? Would it make me happy? Would I even like it? The questions never stop, and the what-ifs never end.

This morning, I woke up with my son. I had breakfast with my husband. In these moments, the what-ifs of my career don’t scream in the background. When my husband leaves, I start on emails. I check my calendar. I take care of what I can, knowing that every 20 minutes of productivity will be rewarded with 10 more of reading board books. My work could be much more efficient at times, of course, but then I remember what I have. My life has gone from a canned recording of a song to an all-out symphony. I’ll never have my shit completely together, I know that. But instead of feeling pushed and pulled in different directions, constantly expected to choose, I’ve already made my choice. I don’t have it all, but I have what I want. Isn’t that more important?

More Like This
Sex And Mom Guilt: When I Date Someone New, Am I Cheating On My Kids?
12 Helpful Tips For Hiking With Kids
15 Adorable CoComelon-Themed Costumes You Can Buy Or DIY
Gathre’s Winnie The Pooh Collection Is Finally Here