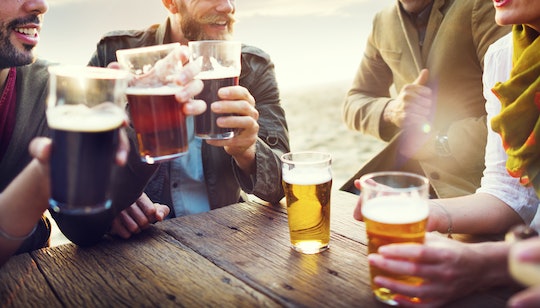 Having A Few Drinks A Week May Be Good For Male Fertility, Study Suggests

Some people have all the luck. A study published earlier this month by the American Society of Andrology found that having a few drinks a week may boost male fertility; in particular, moderate alcohol intake seems to be associated positively to semen quality. This is in contrast to what women are told when they're trying to get pregnant, so this study seems totally unfair to moms and women. That's life, I guess.

The researchers looked at whether alcohol intake can impact male reproductive function, according to Science Daily. And the study ultimately concluded that moderate alcohol intake is linked with higher semen volume and sperm concentration, as well as total sperm count.

It should possibly be noted that this study looked at "men of subfertile couples," as the paper described them. In other words, the population was limited to men who were part of infertile couples undergoing ARTs, also known as "assisted reproductive techniques."

A large sperm count is an important indication of fertility, as Popular Mechanics reported on July 22. Since men in this study who drank four to seven alcoholic beverages each week had higher sperm counts, that habit may actually bode well for their fertility.

As regards low intake, our findings are consistent with other research. In Italy, alcohol consumption is common but usually limited to small quantities, and this applies in particular to men referring to our Infertility Clinic.

Ricci added, "Since the dose makes the poison, they are counselled to limit but not avoid alcohol."

Women, on the other hand, are generally advised not to drink if they're trying to get pregnant. The Mayo Clinic suggests that if you want to get pregnant, you should consider completely avoiding drinking. "Abstinence at conception and during pregnancy is generally recommended because a safe level of fetal alcohol consumption hasn't been established," Mayo Clinic staff wrote on the clinic's website.

However, around half of pregnant women in the United States drink alcohol around the time they become pregnant or during the early stages of pregnancy, according to researchers at the Vanderbilt University Medical Center. It may not be advised, but the reality is that a lot of people who become pregnant don't abstain from alcohol around the time they do so, more of than not because they simply do not know they're pregnant at the moment.

Fertility specialist Aaron Styer, M.D., co-director of the Research Program for the Reproductive Endocrinology and Infertility Fellowship at Massachusetts General Hospital, told SELF in 2016, "At the end of the day, something like alcohol use probably won't affect fertility if done in moderation."

But advising that drinking in moderation probably won't hurt your fertility too much is very different from suggesting that moderate drinking could actually improve your fertility, which is what this new study is suggesting in regards to male fertility.

The study authors acknowledged that they could not analyze people doing heavy or binge-drinking and the impact of that on male fertility, and that those habits "are consistently associated to detrimental effects on semen quality." So again, moderation seems to be the key here, as with most things in life. Researchers concluded that all men going through an assisted reproduction process should at least limit alcohol consumption.

If you have any concerns about your fertility or your partners' fertility and your lifestyle habits, such as drinking alcohol, the best thing you can do is consult your doctor.