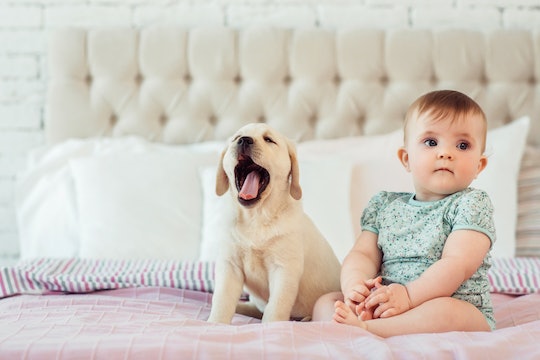 Basically anything involving dogs is bound to be good, right? Videos of dogs, pictures of dogs, even studies about dogs all usually end up making you smile, don't they? Well, as recent research has now found, having a pet dog may actually protect your child from several common health conditions, which is basically the best kind of news anyone who has or wants a fur baby could hope for.

Many might think that having a kid means you may have to rethink owning a dog, but that might not necessarily be true for everyone. According to two new studies from the American College of Allergy, Asthma, and Immunology, "Dogs may protect against childhood eczema and asthma" when kids interact with them at a young age, as PJ Media reported this week.

About "20 percent of babies and young children have eczema, according to BabyCenter.com. The site notes that it "usually starts in infancy, with 65 percent of patients developing symptoms in the first year of life and 90 percent developing symptoms before age 5." So, if there's a way to prevent that from happening and get to keep (or get) a furry friend in your home, wouldn't that be the best of both worlds?

Well, it just gets better from here, trust me. According to PJ Media, the two studies looked at the effects of pups on babies' health and both basically came to the same conclusion: having a dog around when children are young, even before giving birth, could be extremely beneficial to your baby's growing body, as Science Daily noted. The first study looked at babies who were exposed to dogs while still in the womb. "We found a mother's exposure to dogs before the birth of a child is significantly associated with lower risk of eczema by age 2 years," one of the study's authors, allergist Edward M. Zoratti, MD, said in a press release.

Unfortunately, the study also found that the dog's "protective effect goes down at age 10," which means it isn't a perfect solution. However, as eczema is uncomfortable for children and can also make them embarrassed about their skin, any sort of solution, even if it's not forever, is worth exploring.

In the other study, researchers looked at how the presence of dogs can impact allergy symptoms in babies and children, and the results were also encouraging. According to Science Daily, Po-Yang Tsou, the author of the study, explained that there were two different ways they came to their findings. "There seems to be a protective effect on asthma of non-allergen dog-associated exposures, and a harmful effect of allergen exposure," he said.

Of course, these new studies don't mean that medications for eczema and asthma and allergies aren't still necessary or important. They most certainly are and should not be replaced by a cute pooch. This research is added proof that having a dog comes with many health benefits that go beyond mental health.

If nothing else, should all other factors allow it, parents everywhere can now feel even more validated that their dog is doing way more than being your family's best friend.