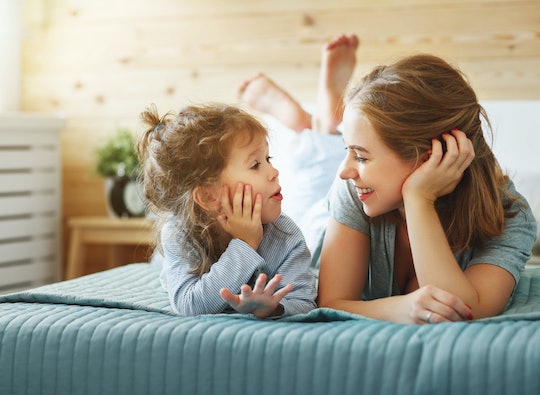 Having Conversations With Your Kid Is The Best Way To Develop Language Skills, Study Finds

Sometimes, it can feel a little odd having back and forth conversations with young kids, especially if that conversation dives into a brief argument. I used to find myself staring at my younger siblings after our talks, wondering if it was strange to be playfully debating someone who just started kindergarten. But, a recent study has found that having conversations with your kids is actually the best way to develop their language skills, as Quartz reported on Sunday.

Researchers at MIT, Harvard University, and the University of Pennsylvania used brain scanners, natural language processing systems, and a variety of standardized tests on 4, 5, and 6-year-olds, as Quartz reported. In the study, published in Sage Journals in February, they found that back-and-forth banter (or, conversational turns) strongly correlated with both more brain activation and stronger scores on tests. Their findings held true regardless of parental income or education.

It’s important to know that a conversational turn includes more than just talking back to your kid. Rachel Romeo, lead author of the study and doctoral student at a joint Harvard-MIT program, told Quartz that focus should be on activating children’s brains through what’s called “serve and return”. The Center on Developing Child’s website describes it as something akin to a game of ping-pong or volleyball; it’s call and response.

“When an infant or young child babbles, gestures, or cries,” the website reads, “and an adult responses appropriately with eye contact, words, or a hug, neural connections are built and strengthened in the child’s brain that support the development of communication and social skills.”

In short, in order for a child to appreciate the full benefits of a conversational turn, then it needs to be an actual conversation. Even if a child seems like they’re babbling about nothing, it’s important for caregivers around them to give full responses, both verbal and nonverbal. Language, after all, isn’t entirely spoken; we communicate within conversations with nonverbal cues, as well, hence why sarcasm works. According to the Australian parenting site, Raising Children, "nonverbal communication is important for strengthening your verbal messages to your child".

Some might think this conclusion is completely obvious. After all, if you’re learning a new language, one of the biggest tips is to practice it. I’ve informally picked up chunks of languages my friends speak by partaking in some level of conversation, benefiting greatly from whether my friends laughed at my attempts or understood what I was saying. But, the name of this recent study — “Beyond the 30-Million-Word Gap” — is pushing back against a framework that used to dominate conversations around childhood development.

In 1995, a landmark study by researchers Betty Hart and Todd Risley concluded that, by the age of 3, wealthy children hear 30 million more words than their poor counterparts, as Quartz noted. Hart and Risley also showed that the number of words kids heard by their third birthday strongly predicted their academic success when they were 9. Since then, the “30 million word gap” was used to discuss inequalities between high and low-income children, and it helped shaped the basis of some early childhood learning, as the U.S. Department of Health & Human Services notes.

What became important was talking to children and making sure to do it a lot. Audio books for babies partially ride off the “30 million word gap,” as do some educational apps or TV programs, according to The Atlantic. The entire idea revolved around making sure babies were exposed to as much language as possible, but there wasn’t always a focus on the serve and return that made retaining information key.

“The sheer amount of language children heard spoken by adults wasn’t linked to children’s brain responses, but the number of conversational turns was,” Romeo told Quartz. Which means, while audio tapes and TV programs aren’t all bad, it’s still important to set up opportunities for a conversational turn.

The study helps underscore important points about children and infants as social learners. In the now-famous 2003 study headed by Patricia Kuhl, University of Washington News reported that 9-month-old American infants who listened to Mandarin Chinese spoken by native speakers were able to distinguish phonetic elements of the language. A second study found that a group of American infants who heard the same material, but by watching a DVD or listening to an audiotape, could not distinguish phonetic units of the language.

This ties back into the idea of conversational turning. What the study found was hearing words alone didn't help infants grasp onto them. Instead, the infants needed a chance to participate in the conversation in some way, which having an in-person teacher allowed them to do.

“These findings indicate that infants can glean phonetic information from first-time foreign-language exposure in a relatively short period of time at 9 months of age, but only if the language is produced by a human,” Kuhl told UW News in 2003. “This suggests social interaction is an important component of language learning.”

Human babies not only learn from their environments, but they learn how to understand the people around them. Most importantly, they can learn to interpret the intentions of someone around them. This ties back into language, where intention creates the majority of the messaging, and intent cannot easily be read into an audiobook.

Although there’s not enough data to concretely say the “serve and return” is at the root of not just conversational turns, but language acquisition as a whole, there’s a lot of evidence supporting it as a wise practice.

So, don’t be worried if you don’t know a lot of big words to pass onto your child. Babies don’t need to inhale the entire dictionary; what they need is for someone to take time with them and speak to them. They are, after all, human.