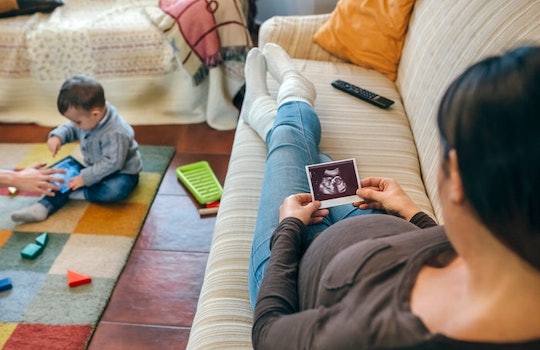 If You're Disappointed With Your Baby's Sex, It's Normal — & You're Not A Bad Mom

When you first learn that you're pregnant, you often begin dreaming about your baby. What they'll look like, who they'll take after, and whether they'll be a little boy or girl. If we're being honest with ourselves, many of us have preferences when it comes to our baby's sex. Maybe it's your second baby and your first was a boy, so you're hoping for a little girl this round. Maybe you've always dreamed of having two little girls because you've always treasured the bond you've had with your sister. Life is unpredictable, and having gender disappointment and feeling guilty about it is perfectly normal when your secret hopes don't align with the reality of the situation.

When I was pregnant with my first child, a boy, no one asked me if I was hoping for a boy or a girl. There was no stress on what I would have, because I would ostensibly have more children after that (a problematic assumption all on its own) and would have more opportunities to have other children. In general, people just wanted to know what I was having. It wasn't until my second pregnancy that people began saying things like "I bet you're hoping for a little girl," or "fingers crossed it's a girl!" Mistakenly assuming that I wanted a girl, when in fact, I was more comfortable with the idea of having another boy. I wasn't disappointed that I was having a girl, but I was more than a little worried. Even my paltry amount of worry caused a great deal of personal guilt.

The guilt over experiencing unwanted emotions based on your child's expected sex is something that is relatively common, according to Dr. Louann Brizendine, a neuropsychiatrist at UCSF and author of The Male Brain and The Female Brain. She told Today that “As many as 1 in 5 women express at least some disappointment about the sex of the child they are carrying.” It doesn't matter that we now know that genitalia doesn't make the gender any more than the pink or blue baby blankets we wrap them in as newborns. Our dreams of the future aren't based in reality, so when reality is shown to be in opposition to our innermost desires, it can be challenging to reckon them with each other.

I spoke with clinical psychologist Jan Harrell, PhD about having gender disappointment and feeling guilty about it, and she tells Romper, "All of us have secret desires. Sometimes we think we shouldn’t, and so feel guilty when we are disappointed." But, she adds that "guilt is merely the emotional alarm signaling that we have deeper feelings — in this case, sadness and disappointment. If we can have compassion for our disappointment (that will always be a part of life), then we won’t feel guilt."

Yes, you may have wanted to have a baby boy or a baby girl, and you aren't. You might never. It's OK to feel that sadness or that longing. But it's likely not going to change how much you love your child. Harrell says that you need to give yourself the room you need to let those feelings flow through you. If you're feeling guilty, try instead to give yourself grace, understanding that expectations and disappointment are natural, and they don't mean that you're a bad parent.

Harrell stresses that "in time (and the parents have months to prepare and allow this process to unfold) we can commit ourselves to accepting whatever we are given and determinedly love what and who is brought to us." A wise friend once told me that an ultrasound can tell you what you're having, but never who you are having, and that is important to keep close to your heart. Harrell says, "The key is to not go to judgment, but to understand disappointment as a natural response to our not being in control." And in the end, you might find that you're even better suited to this outcome than you were for original desire anyway. I know that I certainly was.