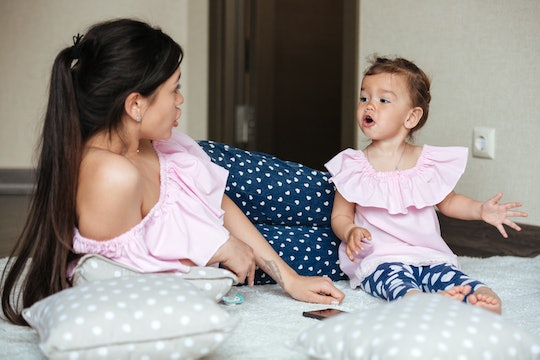 Having "Grown Up" Conversations With Your Kids Aids Brain Development

There are physiological and evolutionary reasons we treat kids the way that we do. When we see a new baby, we are immediately enamored by their scent. When we're speaking to a young child, our voices tend to pitch a few octaves, and we feign excitement and interest in what they're doing. All of this, of course, is in order to evoke a protective instinct in us. That's why it's not only easy but almost natural to use simpler language in front of kids ("baby talk," as some people refer) but what if replacing toilet with "potty" and injury with "boo boo" actually isn't best for them? A new study found having grown up conversations with kids aids brain development in a pretty significant way.

Reuters.com reported that in a new study from Boston Children’s Hospital and the Massachusetts Institute of Technology, researchers found that it is not only the number of words a child is exposed to, but the degree of complexity in "back and forth" conversation with parents that impacts the way their brains develop.

Rachel Romeo, a lead researcher in the study, told the newspaper: “These ‘conversational turns’ are strongly related to the physical strength of white-matter connections between the two key language regions in the left hemisphere of the brain. Most importantly, this relationship between conversational turns and brain structure held independent of family socioeconomic status, indicating the importance of turns across all sociodemographic backgrounds.”

In the study, researchers gleaned information from conversations with 40 children and their parents over the course of two weekend days. The children were aged 4-6, and came from diverse backgrounds, financial situations and parental education levels. Researchers recorded how many words the children heard the adults speak, and then how many they themselves used. They also noted how many pauses were taken during conversations between parent and child, to measure engagement in conversation.

After evaluating brain scans of all 40 children, researchers found that the more they communicated with their parents using a range of words and concepts, the areas of their brains known as Wernicke’s area and Broca’s area, which control comprehension and speech, were more strongly connected than those who had less developed conversation.

However, what is perhaps the most interesting aspect of the study is the fact that stronger brain connectivity and more complex conversational ability were not in any way correlated with the family's socioeconomic status or financial situation. That means that it's not only children from privilege who are receiving these developmental benefits. Anyone can do it, and everyone should.

In 2010, The Atlantic first reported on something called the "32 million word gap," which refers to the difference between how many words children are exposed to dependent upon what type of socioeconomic background they come from. Initial studies on the phenomenon concluded that children from professional homes (as opposed to those on welfare) were exposed to "fifteen hundred more spoken words per hour."

Why does this matter? As NPR reported, closing the gap between what words kids are exposed to can actually be a key in closing wealth gaps in the world. Kids who develop their communication and comprehension skills generally perform better throughout their lives. Be that as it is, we now know that it's not only the quantity of vocabulary that they engage with, but the quality of the conversations being had at home.

The good news is no matter who you are, where you're from, or what your current situation is, you can always make it a point to more actively engage your child in conversation. It might have a profound impact on the rest of their lives.