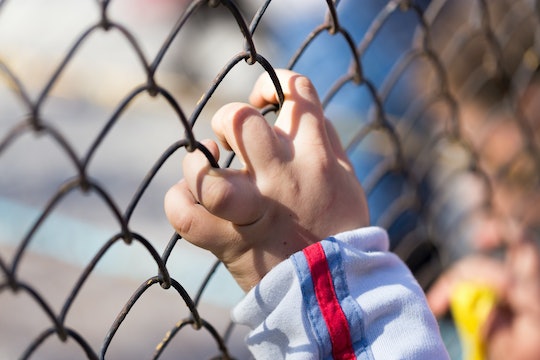 Children With Incarcerated Parents Face These Challenges, But You Can Help

Relationships with parents shape much of a child's development. But when one, or even both, of their parents are behind bars, it could be every aspect of that development. A recent study found that having incarcerated parents affects kids into adulthood, leading to poor decision-making skills and risky behavior. Fortunately, there are a number of organizations looking to lessen the negative impact — and you can help.

The study, which was published in Pediatrics, looked at national survey data from more than 13,000 young adults (ages 24-32), and found that roughly 10 percent had a parent in jail at some point during their childhood, according to Science Daily. The average age when parents were incarcerated is 10. Of these children, those with previously incarcerated parents were more likely to "skip needed healthcare, smoke cigarettes, engage in risky sexual behaviors, and abuse alcohol, prescription and illicit drugs," Science Daily reported.

The study's lead author Nia Heard-Garris, MD, MSc, a pediatrician at Ann & Robert H. Lurie Children's Hospital of Chicago and Instructor of Pediatrics at Northwestern University Feinberg School of Medicine, told Science Daily that the number of children dealing with this issue will increase. "The United States has the highest incarceration rates in the world. With the climbing number of parents, especially mothers, who are incarcerated, our study calls attention to the invisible victims — their children," she said to Science Daily.

Along with making these risky decisions, the Institute for Research on Poverty reported that children with parents in jail often "express negative feelings such as anger, guilt, or confusion about the incarceration." There are also physical manifestations of having a parent serving hard time. Science Daily reported those individuals also have higher rates of asthma, HIV/AIDS, learning delays, depression, anxiety and post-traumatic stress disorder.

The number of children with incarcerated parents may surprise you. As of 2010, 2.7 million children in the United States had a parent in jail or prison — or about one in every 28 minors, according to the IRP. Such high numbers are perhaps part of why so many organizations have made it their mission to help these children. Here are a few that could use your help.

The Angel Tree Program is a Prison Fellowship program that connects children with their parents in prison every holiday season through Christmas gifts. As it is nationwide, you can participate regardless of what state you live in. Generally, local church volunteers purchase and deliver gifts to the children in the name of their parents. To join in on the fun, call Prison Fellowship at 1-800-55-ANGEL or visit the program website.

Hour Children, a program out of Long Island, serves incarcerated and previously incarcerated women and their families. The goal of this organization is to help women meet practical needs, strengthen their bonds with family members, and prepare them for self-sufficiency upon release. Visit the program's website to learn how you can help.

SKIP, or Saving Kids of Incarcerated Parents, is an organization with franchises across the U.S. It works closely with children and their caregivers to strengthen positive relationships in children's lives. Additionally, SKIP provides behavioral and academic empowerment programs for children who have one or both parents in prison. Find a franchise near you to help out.

Children are the unseen victims of mass-incarceration. Research has made it clear that they feel the consequences of time away from parents who are behind bars for years after the fact. Getting involved with strengthening these children's positive relationships and bridging the gap between children and parents is one way to help.

More Like This
15 Weird-But-Genius Products For Breastfeeding Parents
Kids With Head Lice Don't Need To Miss School, AAP Stresses In Updated Guidelines
What Is RSV?
10 Parenting Lessons From Abbott Elementary That You'll Want To Write Down