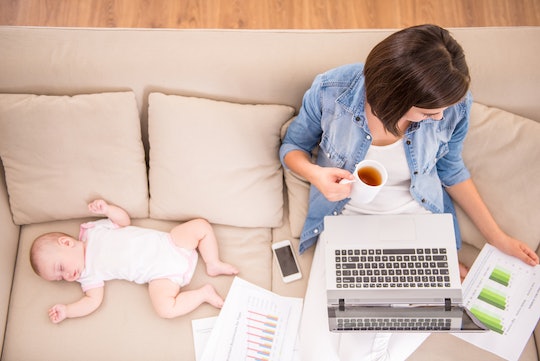 Study: Having A Baby Can Set A Mom's Career Back By 6 Years

Being a woman in the workplace is still not as fair and balanced as it should be. On top of that, many women struggle with finding the right time to bring kids into that equation. This decision is made even more difficult by the fact that having kids can set a woman's career back by years, as a recent survey has found.

The survey conducted in the United Kingdom, as reported by The Mirror, found that motherhood can have a medley of negative effects on a woman's work life, primarily setting it back by more than half a decade. In fact, the study commissioned by Easy Offices and conducted by OnePoll.com, found that having a baby sets a woman's career back by as much as six years.

Researchers examined information from 1,000 British mothers with children between the ages of 1 and 13, and determined that motherhood can lead to missed advancement opportunities, staff issues, management or procedural changes in the workplace, and shifting priorities in the mothers, as The Mirror reported.

According to the findings, roughly 50 percent of those interviewed said having a child negatively impacted their career and 42 percent said that they believed they would have reached a more senior role had they not became a mother. The results of this survey also revealed that 37 percent of surveyed working moms believe that they have been discriminated against since having a child, according to The Mirror.

These findings are certainly concerning now that working moms are on the rise in the United States, According to the U.S. Bureau of Labor Statistics, the percentage of mothers with children younger than 18 with gainful employment outside of their home has jumped from 45 percent in 1975 to nearly 71 percent by 2012. Unfortunately, Psychology Today reported that this demographic still faces obstacles such as limited daycare options and employer discrimination. Working mothers also tend to earn less money than women without children, even when additional factors such as education and commitment to work are taken into consideration, according to Psychology Today.

While maternity leave is an important and crucial asset to working mothers, this study found that it is often not enough to ease all of the burdens. Mothers in the study took an average of 30 weeks — about seven months — of leave for their most recent child. And survey participants reportedly said that it takes about 13 months to get back in the swing of things professionally after taking time off for maternity leave and about 15 months to adjust to balancing the demands of family and work, according to the findings.

A spokesman for Easy Offices told The Mirror that even those who were offered and took advantage of such maternity leave still have many struggles to overcome:

It may not be a surprise to learn having a baby changes your life but we might not realize just how long it takes to adjust to it — especially in the workplace. The working world moves forward at a fast pace so it’s understandable mums would find returning to work a bit of a shock to the system. Perhaps colleagues may not fully appreciate this point of view so mothers might feel more could be done to rectify this.

Aside from adjusting to this new balance, there are a number of challenges faced by women in the workplace, many of which are amplified when these women become mothers. According to Forbes, millennial women often have to work harder than men to receive recognition at work, overcome absurd expectations of workplace appearance, and continuously fight gendered workplace roles.

Along with professional setbacks, working mothers also tend to face judgement for their decision to return to work once children are in the picture. There is guilt, pressure, and prejudice to contend with, making an already stressful workload even more overwhelming.

Despite economic pressures to have both parents in the workforce, there is a lingering stigma that working moms aren't putting their children's well-being first. This, of course, is not the case. In fact, working moms have a profoundly positive impact on their children — daughters in particular. A recent survey conducted by the Harvard Business School found that girls with working moms grow up to earn a higher income, so that stigma needs to be squashed immediately.

As if moms didn't have enough to worry about, this survey's findings — along with a plethora of other relevant studies and stats — prove that women really do have to work that much harder to get and stay ahead, especially if they decide to have a family one day.