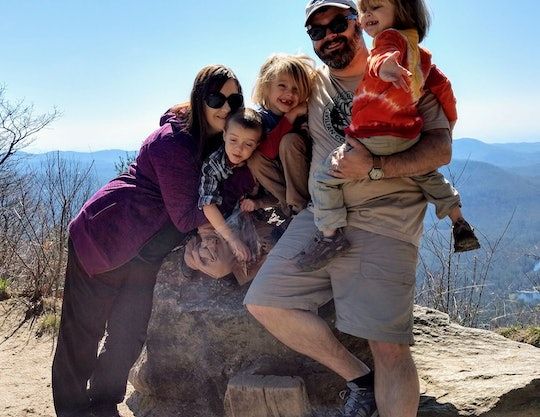 My Kids Will Have The Childhood That I Deserved

From the outside, it must have looked like I had an easy childhood. I grew up in a big Victorian house, with lots of dogs and lizards. I attended private school on a scholarship. I had riding lessons and a pony. I had two parents and a close extended family that all lived quite nearby. But although I was, in many respects, quite privileged, my memories of my childhood are marred with pain.

I don't remember many hugs. I remember a lot of hurt. I spent much of my time crying in my room, biding my time, waiting for something that I couldn't name. To be accepted, I suppose. To be loved. And the moment I had kids, I swore that they would never, ever experience the trauma I did as a child.

Now that I have my own children, I have had to grapple with the issues I thought I’d dealt with long ago. Becoming a parent has forced me to truly be able to see both sides of the trauma, to deal with it, to hold it in my hands and say: look. This is what happened. This is my truth. This is the hurt I carry every single day.

Part of the reason why my childhood was so difficult was because I struggled with mental illness. When I was about 7, I started experiencing depression and anxiety, both of which were occasionally crippling. I also struggled with what I later discovered was ADHD, so I was often distracted and unfocused, which was a major source of frustration for my parents.

My parents spanked us, which taught me that I couldn’t trust their hands to be kind.

Although I was officially diagnosed as an adult, my parents never sought help for me when I was growing up. They knew something was "wrong" with me, because they frequently got calls from my school. But because they did not believe in psychiatry, they never sought treatment for me, even when one of my teachers caught me self-harming. In retrospect, I realize I was the victim of medical neglect.

I don't think my parents meant to hurt me. I think they did the best they could. But because they had no idea I struggled with mental illness, their idea of discipline was to resort to mockery and hurtful insults. They told me that I wasn't smart, and that I was ungrateful and bad. "You have no common sense," they would say. "You can't think." Once, my mother told me it was my fault that I didn't have any friends. They also spanked us, and while I realize that they didn't mean to harm us, it taught me that I couldn’t trust their hands to be kind.

It took me becoming a parent for me to come to terms with how traumatic my childhood was. Every once in a while, I began to hear my mother slip out of my mouth. “What’s wrong with you?” I would demand, when my kids wouldn’t put their shoes on or stop fighting or stop jumping on the dog. Then I'd immediately stop and think: Oh my gosh, I just told my four-year-old he has something deeply wrong with him. How screwed up is that? What kind of message is that to send to a child? I realized I had heard my mother ask what was wrong with me so often that I’d internalized it. Now it was coming out of my mouth because I’d learned it so well.

I had spent my childhood living in fear of my parents' violence, and I'd vowed that my children would never feel that way about me.

I also struggled with the idea of teaching my kids respect. Respect was everything in my house, and not showing respect to your parents got you a smack across the face, or at least the threat of one. When my kids talked back to me, it was enough to send me flying into an uncontrollable rage. After my husband pointed out to me that I was overreacting, I realized that I was making the same horrible mistake of prioritizing teaching my kids respect over teaching them love, understanding, peace, and kindness. I was yelling at them, because I had been yelled at so often as a child. My heart hurt over how I had treated my kids.

Worst of all, even though I swore for years that I would never lay a hand on my children, one day the kids pushed us too far, prompting me to pick up my oldest and spank him on his rear end. It didn’t feel good. It didn't feel cathartic. It felt sick. I had spent my childhood living in fear of my parents' violence, and I'd vowed that my children would never feel that way about me. But in a moment of anger, I had broken that promise. I promised my kids I would never spank them again, and now when I'm angry at them, they tell me, “You aren’t allowed to spank us.”

When I became an adult, I entered therapy. I told my doctor the things my parents had said — that I had no sense, that I wasn't smart, that I was ungrateful and bad. As a parent, I remember these things and I am appalled. How could you say these things to your children? I could never look at my son and tell him he had no common sense, or that it was his fault he didn’t have any friends.

I realize now that this is something people only say when they are at the end of their rope, when they don't have the strength to do or say anything else; when they don't know any alternatives. I understand this. But I am still angry at my parents. The hurt lingers, even if the understanding stays. My parents say they’re sorry, and they can make amends, and I can forgive them. But they will never be able to return my childhood.

That's why I will hug my kids. I will value curiosity over obedience and love over respect. I will never spank them. I will never tear them down. And most of all, I will let them know I love them, every single day, by holding them in my arms and showering them with kisses. They will not grow up with this deep core of sadness. This pattern will end here, with me. I can stop the trauma. And I will.

If you struggle with depression or anxiety, please seek professional help or call the NDMDA Depression Hotline at 1-800-826-3632.