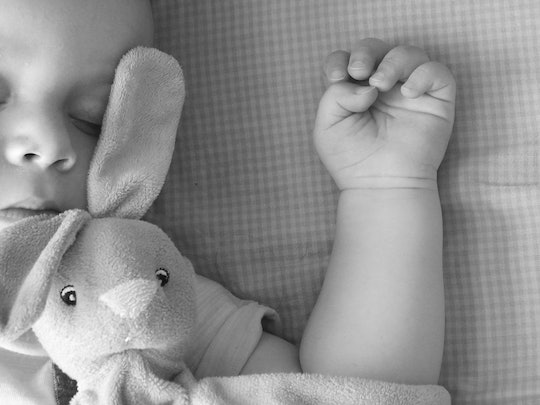 Having Kids Means Less Sleep For Women — Not Men

Most moms will tell you that they didn't need a scientific study to prove that they're sleep deprived. For most of human history, sleep deprivation has kind of gone hand-in-hand with motherhood — especially for moms with newborns. While moms may not have needed proof, a new study that shows having kids means less sleep for women — but not men — brings up some really important questions about the disparity in child-rearing responsibilities between men and women.

As any new mom knows, sleepless nights don't end just because a baby starts sleeping through the night. For many women, insomnia may have started while they were still pregnant — especially in the final months of pregnancy, when getting comfortable can be a real challenge. In fact, insomnia is extremely common in pregnancy, affecting around 78 percent of moms according to the American Pregnancy Association. While it's inconvenient and frustrating, it's also totally normal.

Once the new baby arrives, however, those nights of inadequate sleep don't usually get better for a while: even though newborns sleep a lot — upward of 16 hours a day — they don't sleep for long stretches at a time, including during the night. Every few hours, most babies wake up in need of a diaper change or feeding, and these tasks more often than not fall to mom, especially if she's breastfeeding on-demand.

All babies will start sleeping consistently through the night on their own schedule, but most babies will do so at least most of the time by the time they're 6 months old. Of course, this doesn't mean that parents are back to the non-interrupted nights they had pre-kids. Toddlers and young children can be restless sleepers due to everything from bad dreams to bed wetting to potentially serious conditions like sleep apnea. If a kid is sick, especially with a chest cold, which tends to be worse at night, sleeping might also be out of the question, at least for a few days.

So, why is it that moms end up more sleep deprived than dads? Researchers at Georgia Southern University analyzed responses from a nationwide telephone survey of 5,805 people from around the U.S. that asked questions about participants' sleep habits. When they broke the respondents into groups by demographic information and looked at their sleep habits, they found that, among women younger than 45 years old, the only thing that influenced their sleep habits was having children in the house.

Women with children also reported feeling tired more days out of the month than women without children: 14 days versus 11 days. The men surveyed who lived in a house with kids didn't report that their sleep was affected.

Sleep deprivation might seem like just a fact of life for moms, but it can actually be seriously bad for your health: not getting enough sleep doesn't just impact your ability to pay attention and focus during the day (especially during potentially dangerous tasks like driving) but it also affects your immune system, which can lead you to get even more run down. For these reasons and more, moms should feel validated that science has basically confirmed what they've always known: that they're really overtired, and their partners should definitely be bearing equal weight of child-raising responsibilities — day or night.