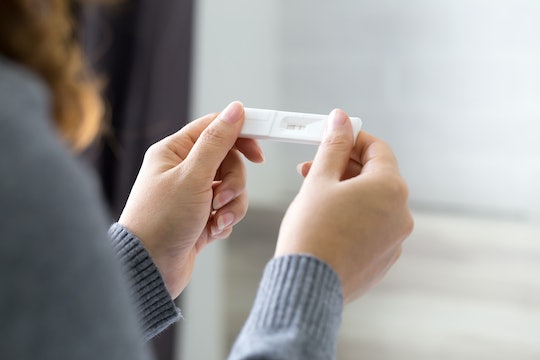 Having 5 Or More Children Could Increase Your Risk Of This Disease, Study Says

A lot of factors influence a woman's decision to have more children, not least of which is the impact on her health and body. The results of a recent study may have some reconsidering their desire for large biological families. Researchers found that having more children could increase Alzheimer's risk in women; specifically those having five or more children. While hormonal changes are a suspected factor, it is unclear why having multiple children increases risk.

A team of researchers looked at more than 3,500 women from South Korea and Greece in order to determine how the size of their biological families impacted their cognitive abilities. According to CNN, the study, published in the journal Neurology, found that women who had delivered five or more children were as much as 70 percent more likely to develop Alzheimers later in life than those who had less children. Additionally, even those women who did not have dementia, but had delivered five or more babies scored lower on cognitive tests than those who had not.

The women involved in the study were all older than 60, with an average age of 71. After age 60, a woman has a one in six chance of developing Alzheimer's, according to the Alzheimer's Association — that's an even greater risk than developing breast cancer, which is one in 11. Along with examining how complete pregnancies — those resulting in the delivery of a full-term baby — impacted Alzheimer's risk, the team also looked at interrupted pregnancies.

Surprisingly, those women who had an incomplete pregnancy had their risk of Alzheimer's almost cut in half, as Dr. Ki Woong Kim, a neuropsychiatrist at Seoul National University and the study's lead author, wrote in an email to CNN:

This sort of research is particularly important due to the high number of women in the U.S. alone suffering from Alzheimer's. Women are more likely than men to develop the condition. The Alzheimer's Association reported that almost two-thirds of Americans with Alzheimer's are women and more than 60 percent of Alzheimer's and dementia caregivers are women. Maria Carrillo, chief science officer for the Alzheimer’s Association, told Alzheimers.net that there is a need for more research:

There are enough biological questions pointing to increased risk in women that we need to delve into that and find out why. There is a lot that is not understood and not known. It’s time we did something about it.

Kim and her team were not able to narrow down exactly why more pregnancies were linked to Alzheimer's risk, but Kim suggested that it is likely due to hormonal changes. But Dr. Carol Routledge, director of research at Alzheimer’s Research UK, told Newsweek that nonbiological factors cannot be completely ruled out:

This study lends support to the idea that estrogen or other hormones may have an impact on Alzheimer’s risk, but we don’t understand the nature of this relationship. There will be a wide range of factors associated with having a large number of children, and while the researchers tried to take social and economic status into account in their analysis, it is impossible to rule out non-biological causes for this apparent link.

While the results of this study do not provide definitive evidence as to the why and how pregnancy impacts dementia and Alzheimer's risk, they do underline the need for more information and research. The more information that women have on how pregnancy and childbirth impact their health, the more capable they are of making decisions that are in their best interest.