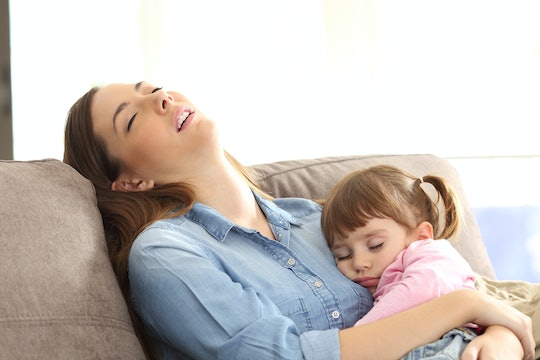 Anyone who has experienced it for themselves will probably agree that pregnancy is no walk in the park. Between the physical strain of growing another human being, the added weight your body is carrying around, and those sleepless nights spent tossing, turning, and getting up to pee roughly 1 million times, a woman's body is basically put through the wringer. (And don't even get me started on the exhausting newborn days, or the trying toddler years.) It's no wonder the stress of growing and raising children prompts parents to joke about their children "giving them gray hair. Because as it turns out, research has proven that pregnancy in particular takes a tremendous toll on the body. In fact, having children really does speed up the aging process, according to this new study.

Researchers from Northwestern University recently published a study in Scientific Reports that found with each pregnancy, a mom's cells can age by between six months and two years, Motherly reported. For this study, researchers looked at 821 women between the ages of 20 and 22 in the Philippines. (These women all had varied reproductive histories.) What researchers ended up doing was looking at two specific markers of cellular aging: Epigenetic age and telomere length. In case you're scratching your head, wondering WTF a telomere is, it's just the end part of a chromosome that's associated with longevity, according to the New York Post. So as more time passes, a person's telomeres become shorter and shorter — or in this case, the more babies a woman had, the shorter her telomeres were in relation to her actual age.

"Telomere length and epigenetic age are cellular markers that independently predict mortality, and both appeared 'older' in women who had more pregnancies in their reproductive histories," Calen Ryan, lead author of the study and a doctoral student at Northwestern, said in a statement. "Even after accounting for other factors that affect cellular aging, the number of pregnancies still came out on top."

It's worth noting this recent research from Northwestern University isn't the first study to link having more children to shorter telomere length. A study published earlier this yaer in the journal Human Reproduction also suggested that motherhood changes a woman on the cellular level. Researchers at George Mason University in Virginia wanted to better understand how giving birth and motherhood affects women's genetic structure, Medical Daily reported. For this study, researchers compared the telomeres of 2,000 women (both with and without children) between the ages of 20 and 44. What they ended up finding was mothers' telomere shortening was comparable to woman who were 11 years older and childless.

If these studies leave you swearing off more kids for good, take heart. Moms of two or more kids — along with women who plan on one day having big families — shouldn't freak out just yet. "We don't know if these findings are permanent," Langdon said, according to Healthline. "More longitudinal studies need to be done over many years, even decades, to see if this is reversible or if it really can predict when you will die." That's probably why researchers from Northwestern University and the University of Washington have already embarked on a follow-up study that looks at this same group of women 13 years after their cellular measurements were taken.

So the next time you manage to catch your reflection in the mirror and notice lament over those deepening laugh lines or additional strands of gray hairs, know that there's scientific support for blaming your children .. at least sort of. I'm not sure of shortening telomeres directly correlates to women looking and feeling exhausted by the demands of motherhood. But it sure feels good to shift part of the blame on something other than our approaching middle age, doesn't it?