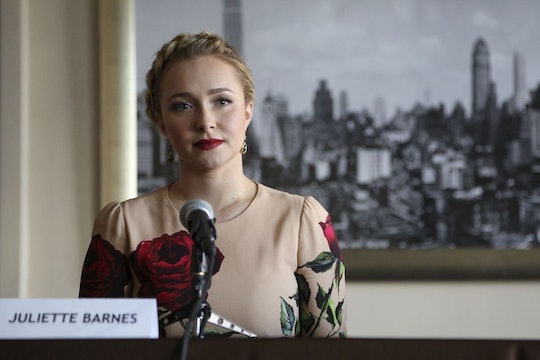 Hayden Panettiere Returns To 'Nashville' & Shows A New Side To Juliette

After a three-month hiatus from filming, and a multi-episode departure, Hayden Panetierre returns to Nashville in the Season 4 episode "What Cannot Change." Echoing her own struggle with postpartum depression and breaking from filming to seek treatment, fans find Panettiere's character Juliette Barnes just as she's checking herself out of treatment, with the approval of her therapist. And, simply from the first episode back, it is obvious that Nashville is approaching this topic honestly and thoughtfully.

Juliette's bond with Cadence is stronger than ever, she seems drug and alcohol free, and refreshed. Of course, the minute she returns home, Juliette's new manager approaches her with a script from Stephen Spielberg. There's interest in her playing a cameo role Scarlett Johansson just turned down. Juliette is in love with the part, but feels conflicted since she's promised herself time off to focus on herself, and readjust to motherhood.

Her visit with Avery doesn't do much to alleviate these new, back-to-reality stresses. She drops by unannounced before Avery even realizes she's out of treatment — probably not the smoothest start to their new co-parenting relationship — but she does it so she can level with him in person. Juliette wants to be able to spend more time with Cadence now that she's out of treatment, clean, and still regularly seeing her therapist. Avery swiftly turns her down, pointing out that she's fresh out of rehab, that the real world is not a "protected environment," and admitting that he "can't trust" her commitment on her first day out.

For her part, Juliette offers a thoughtful admission of her past transgressions, saying, "I know that I've caused you so much pain and I let you down and I've let her down. But I've done so much to overcome my addictions and my postpartum."

But Avery just can't bring himself to trust her yet.

Later, in therapy, Juliette recounts the disappointing conversation to her therapist, who tries to provide comfort during Avery's process while acknowledging her hard work.

Surprisingly, the therapist actually congratulates Juliette on her Spielberg offer, but the singer-turned-Oscar-buzzed-about-actress still feels conflicted about whether or not she should accept the role since it means she'd have to go away for two weeks and give up the little time she does have with Cadence to shoot the movie.

Ultimately, Juliette decides to go for it, and calls Avery to let him know. Understandably defensive, he scolds Juliette for jerking him around, in disbelief over how, one day, she wants more time with the baby, and the next, she wants to jet off to New York to shoot a movie. He eventually lets her see Cadence off-schedule to do her bedtime routine one last time before Juliette has to leave. Cadence is fussy, and Avery worries about whether Juliette can handle her, but she seems to cope just fine, eventually singing Cadence to sleep.

At the press conference for the film, though, Juliette has a change of heart. At first, it seems like she might simply be shooting for brutal honesty with the press, but eventually, she talks herself out of the role right in the middle of taking a question:

"I haven't been doing well, and that's the truth. I've been suffering from postpartum depression since my daughter was born. And I've been in treatment for the past two months and I got out yesterday. I was headed down a dark path and it cost me my marriage, and my relationship with my daughter, and it nearly took my life. I apologize, I shouldn't have signed on to do this movie. I need to be with my daughter right now."

She walks off the stage and heads straight home, where Avery catches up with her, Cadence in tow. He admits that he heard she was coming home, and thought that maybe, since she was going to be around more, she'd like to spend more time with the baby. Juliette insists that she didn't quit the movie just so he would change his mind, but Avery reassures her that he didn't change his mind just because she quit the movie.

The way the show handles Juliette's emotional state, her careful work towards being vulnerable and honest about her emotions, and her acceptance of things when they don't go her way shows how far she's come. Instead of lashing out or avoiding her feelings, she's able to experience them fully — even when they're emotions like disappointment or anxiety. She also seems more flexible, trying things out and then not immediately turning into a control monster when things don't go as planned.

Avery's characterization makes a lot of sense, too. It's completely understandable that he would feel distrustful and protective of Cadence when Juliette first gets out of treatment. But, as long as she can keep proving her trustworthiness, and taking accountability for when things go wrong, it seems like they're on track to at least co-parent together again successfully.

Postpartum depression is different for everyone that faces it. While viewers might not identify directly with Juliette's case — or even Panettiere's — knowing that a TV show is allowing there to be an outlet for conversation about the common situation is important. Hopefully the show continues its thoughtful and progressive conversation about postpartum depression so fans watching can continue to identify and learn.