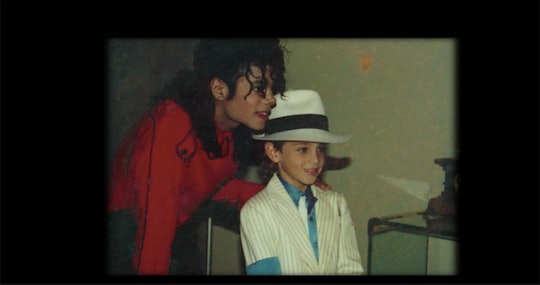 HBO Has Released The First Trailer For 'Leaving Neverland' — VIDEO

Less than a month after the film premiered at the Sundance Film Festival, HBO released Leaving Neverland's first trailer. The documentary, which investigates sexual abuse allegations against Michael Jackson, features two of his accusers.

Leaving Neverland, as described on Sundance's website, aims to paint “a portrait of sustained exploitation and deception, documenting the power of celebrity that allowed a revered figure to infiltrate the lives of starstruck children and their parents.” In particular, the film offers a critical look into Jackson's relationships with Wade Robson and James Safechuck, who both alleged that Jackson “sexually abused” them when they were 7 and 10 respectively, according to E! News. Both men are now in their 30s.

The trailer touches on these claims, which features both Robson and Safechuck reflecting on their time with Jackson, as well commentary from their mothers.

In the 1:38 minute trailer, both men introduce the world of wonder they enjoyed after breaking into Jackson's inner-circle. "The days were filled with magical childhood adventure experiences: playing tag, watching movies, eating junk food," Safechuck, explained, according to The Hollywood Reporter. "Anything you could ever want as a child."

Robson's mother, Joy, backed up this sentiment. "We drive in and you forget about all your problems," she says in the trailer. "You're in Neverland. It was a fantasy."

The trailer then takes on an ominous tone, with both men alluding to secrets and alleged inappropriate activities. "He told me if they ever found out what we were doing, he and I would go to jail for the rest of our lives," Robson, a former choreographer, states in the clip.

Safechuck discussed feeling isolated during his time with Jackson, explaining, "Secrets will eat you up. You feel so alone."

As for Jackson's estate, it has slammed the documentary's claims as "pathetic." "This is yet another lurid production in an outrageous and pathetic attempt to exploit and cash in on Michael Jackson,” a Jan. 10 statement to People reads.

The statement continued: “Wade Robson and James Safechuck have both testified under oath that Michael never did anything inappropriate toward them. Safechuck and Robson, the latter a self-proclaimed ‘master of deception’, filed lawsuits against Michael’s Estate, asking for millions of dollars. Both lawsuits were dismissed.”

“This so-called ‘documentary’ is just another rehash of dated and discredited allegations,” the statement concluded. “It’s baffling why any credible filmmaker would involve himself with this project.”

The estate issued another statement following the premiere, stating in part, according to Entertainment Tonight:

Michael Jackson is our brother and son. We are furious that the media, who without a shred of proof or single piece of physical evidence, chose to believe the word of two admitted liars over the word of hundreds of families and friends around the world who spent time with Michael, many at Neverland, and experienced his legendary kindness and global generosity. We are proud of what Michael Jackson stands for.

HBO, however, has remained steadfast in its support of the film's director, Dan Reed. "Our plans remain unchanged," the company said in a statement, according to The New York Times. "Dan Reed is an award-winning filmmaker who has carefully documented these survivors' accounts. People should reserve judgment until they see the film."

Leaving Neverland, a two-part documentary, is set to air on HBO on Sunday, March 3, and Monday, March 4.