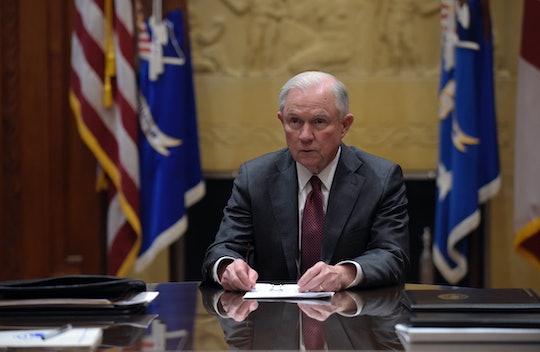 Jeff Sessions Has Always Been An Unfit AG

Attorney General Jeff Sessions failed to disclose at least two meetings with Russia’s ambassador to the United States in the months preceding the general election, according to the Washington Post. If true, that would mean that Sessions had perjured himself during his confirmation hearings last January when he twice denied having any communication with the Russian government while he was a surrogate for Donald Trump’s campaign. And it could be enough to force Sessions to step down from his Department of Justice post, coming just weeks after Michael Flynn’s resignation over similar allegations. But even as Senate Democrats voice outrage over evidence that the nation’s chief law enforcement officer had lied under oath, the realization that Jeff Sessions might be an unfit attorney general should hardly be a surprise. Evidence of Sessions’s racist views, biased decision making, and blatant disregard for civil rights has been public knowledge since the 1980s.

The DOJ and White House haven't responded to questions about whether Sessions perjured himself, and Sessions' office hasn't responded to Romper's request for comment regarding racism allegations.

By Thursday morning, Senate Democrats had issued multiple statements pressuring the White House to take action against Sessions in light of the secret communications with the Russian ambassador. Senate Minority Leader Chuck Schumer called on Sessions to resign following the reports and House Minority Leader Nancy Pelosi called Sessions “unqualified and unfit” in a press conference Thursday morning. In a series of tweets Wednesday night, Massachusetts Senator Elizabeth Warren also called for Sessions to step down, adding that he never should have made it to DOJ to begin with.

But there was ample evidence that Sessions was the wrong choice to oversee the Justice Department — with its power over how civil rights laws are applied nationwide — long before his testimony to the Senate Judiciary Committee.

More than 30 years ago, civil rights activist Coretta Scott King wrote a letter to Congress in hopes of blocking Sessions’ nomination for a federal judgeship. The nine-page letter available on the Washington Post website detailed Sessions’ alleged history of intimidating and violating the civil rights of blacks in Alabama. King warned the Senate Judiciary Committee that the Alabama lawmaker had a dangerous history of “politically-motivated voting fraud prosecutions” and that he “lacks the temperament, fairness and judgment to be a federal judge.” She added that his ascension to the federal bench “simply cannot be allowed to happen.”

The wife of Martin Luther King Jr. wasn’t the only person who thought Sessions was too racist to hold higher office. Allegations that Sessions had called an African American colleague “boy,” had said the NAACP was “un-American,” and had joked that he thought the Ku Klux Klan wasn't that bad until he’d learned that some members smoked marijuana all played a role in the Senate’s failure to confirm Sessions in 1986. Sessions was eventually elected as U.S. senator for Alabama where, according to a Mother Jones magazine report, he used his considerable influence to block almost every black candidate for federal judgeship in the state over his 20 years in office.

But evidence of alleged racism and bigotry was apparently no dealbreaker when it came time for Trump to choose his attorney general. And after Sessions was sworn in to oversee Trump’s Justice Department, he made it clear that, under his leadership, the agency would no longer prioritize protecting marginalized populations. Within days of taking his oath, Sessions signaled that the department would roll back protections for transgender students enacted under President Obama and would drop its objections to a Texas voter ID law. Days later, Sessions walked back the tough stance the agency had taken under President Obama on monitoring local police departments and investigating allegations of police brutality.

In a move that all but sealed what civil rights activists had feared about a Sessions-run DOJ, Sessions said in his first speech as attorney general that DOJ scrutiny was undermining local law enforcement effectiveness, according to the New York Times. But when asked by Huffington Post reporters to give his thoughts on clear evidence of police brutalization uncovered in DOJ investigative reports on police departments in Chicago, Ferguson, and Baltimore, Sessions not only implied that the reports weren’t valid, he admitted that he hadn’t bothered to read them.

So far, the White House has voiced nothing but support for Sessions, according to multiple news reports. And despite enormous pressure from Congressional leadership, Sessions has resisted calls to step down from office or recuse himself from any potential investigations into Russia’s communications with the Trump campaign.

Still, we should all be clear that if Sessions is forced to resign, it will only be because Congress and the White House agree that having an attorney general who lies under oath is unacceptable. It will be because, as Sessions said during President Bill Clinton's impeachment hearings, perjury and obstruction of justice is never acceptable from those who take an oath to protect and defend the Constitution. But it will not be because our nation's lawmakers have taken a stance in support of civil rights.

And the takeaway from that is this: We now live in a time where an attorney general who might have committed perjury is unacceptable, but one with a possible 30-year history of racist statements, discrimination, and civil rights violations? Well, that would have been just fine.