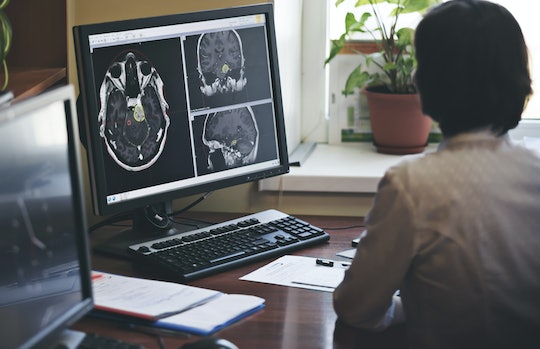 When it comes to the brain, there's still a lot about it that people just don't understand. This lack of understanding is part of what makes dealing with cognitive decline so difficult but, thankfully, new studies are being done all the time that help to advance people's knowledge. Recently, new research found that healthy cholesterol levels may be vital for women avoiding dementia, and here's why that's so important to know.

People sometimes get dementia and Alzheimer's confused in conversation. The main distinction to remember is that dementia isn't an illness, but a group of symptoms. It refers to symptoms that affect one's memory, ability to perform daily activities, and communication, according to Healthline. On the other hand, as Healthline noted, Alzheimer's disease is the most common kind of dementia.

Often, when asked to describe or picture someone with dementia, the image that comes to mind is an elderly man. However, dementia is most commonly found in women. According to Brain Test, 5 million people in the United States currently live with some form of dementia related to their age. Approximately one out of every six women and one out of every 10 men living past the age of 55 will develop some form of dementia, according to estimates, Brain Test reported.

That's why it's important for studies to dive into how dementia develops amongst women specifically.

Researchers from the University of Melbourne worked with data from 135 participants from the Women's Healthy Aging Project to look at the implication of cardiovascular risk factors in middle age on cognition for women who are aging normally, according to a study published in Brain Imaging and Behaviour noted.

In 1992, the participants completed "midlife cardiovascular risk measurements," and then had brain scans and cognitive assessments in 2012, the study's abstract noted. Researchers found that women with normal levels of "good" cholesterol in 1992 had less white matter damage in their brains later in life, as reported by University of Melbourne's Pursuit.

Researchers focused on a type of cholesterol known as HDL, which is known as the 'good' cholesterol, according to WebMD. It moves through the bloodstream and helps to lower bad cholesterol, as outlined by WebMD.

A separate study that was also published in Brain Imaging and Behaviour helped highlight that researchers can predict a woman's memory performance at age 70 based on the volume of gray matter in their brain 10 years prior.

Together, both of these studies mean a lot for understanding dementia in women. These studies are essential to helping people predict and manage cognitive decline in older women.

“Taken together, these findings show there are useful neuroimaging biomarkers for the prediction of cognitive decline in healthy older women. They build on a growing body of research helping us pick up the warning signs of dementia earlier."

Dementia may be frightening for people to discuss, but a big part of that fear is based around lack of understanding. Hopefully, additional research will help people know how to not only spot dementia, but help women work to prevent it.

More Like This
Banana Boat Sunscreen Has Recalled Products That Were Found To Contain Benzene
New York Can End Religious Exemptions to Vaccine Mandates, Says A Federal Appeals Court
How To Avoid & Treat Lyme Disease
Gathre’s Winnie The Pooh Collection Is Finally Here