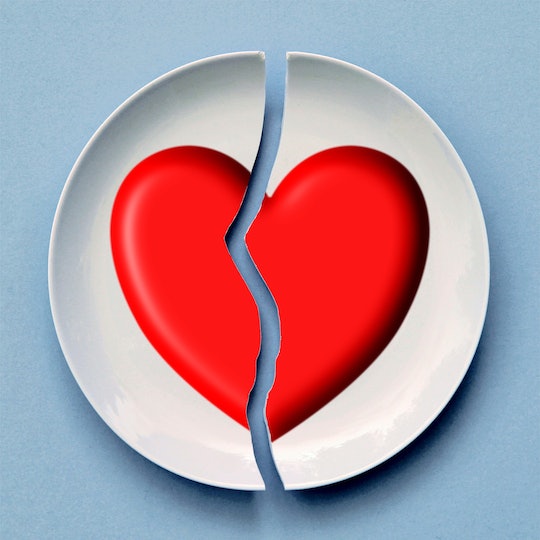 Heartbreak Is A Real, Physical Condition, & It Mostly Happens To Women

Plenty of traumatic and emotional life experiences can leave a person with a broken heart: the death of a loved one, a breakup, a significant professional setback. The term "broken heart" is about as ubiquitous in popular culture as tears are in the face of the events that are widely considered to cause the intense sadness commonly referred to as a broken heart. But what many people may not know is that your heart can actually, physically break — at least in a medical sense. And it's a whole other level of broken heartedness that primarily affects women. In fact, The New England Journal of Medicine recently documented a quintessential case of this literal "broken heart syndrome" recently, showing just how powerful emotions really can be.

According to The Washington Post, 61-year-old Joanie Simpson was airlifted to a Houston-area hospital last year with symptoms of a heart attack soon after her Yorkshire terrier, Meha, died. Doctors who treated her, though, soon found that her arteries were not clogged at all, as those of a true heart attack patient would be. Soon, Simpson would learn that she had suffered from a classic case of Takotsubo cardiomathy, which is, truly, the medical term for a broken heart. She recovered relatively quickly and is now doing well.

Although Simpson's case may seem like a fluke or an anomaly, it's actually a documented medical phenomenon. According to the American Heart Association, broken heart syndrome occurs when a person experiences an intense shock — even a happy one, such as winning the lottery — and part of the heart temporarily enlarges and ceases to pump blood well. The rest of the organ carries on normally. Physical symptoms, such as chest pain and shortness of breath, align with those of a heart attack, although they are two distinct conditions. In some very rare cases, broken heart syndrome has been fatal. Most patients recover, though.

And, most patients are women. A 2011 study out of the University of Arkansas found that broken heart syndrome affects women at a rate of seven to nine times more than men. And older women are the most commonly affected. Those who are 55 and older are three times more likely to suffer broken heart syndrome than younger women. It's unknown exactly why women are so much more susceptible to this than men, but Mayo Clinic cardiologist Abhiram Prasad theorized that hormones can explain it, CBS News reported. And Dr. Abhishek Dehmukh, who led the University of Arkansas study, believes fact that men have more adrenaline receptors in their hearts could enable them to handle stress better than women do.

So, that's a huge bummer. The good news is that some medical professionals believe that yoga, meditations, and other breathing and relaxation techniques can help to prevent broken heart syndroms it, as it's caused by stress.

The fact that a shock, sadness, and anguish that often accompanies an emotional and traumatic event can result in a true medical emergency kind of stinks. But Simpson, who experienced broken heart syndrome after losing her 9-year-old dog, said that she won't let her tendency to take "things more to heart than a lot of people," to stop her from loving another pet as much as she did Meha, as The Washington Post reported:

It is heartbreaking. It is traumatic. It is all of the above. But you know what? [Pets] give so much love and companionship that I'll do it again. I will continue to have pets. That's not going to stop me.

It's hard not to admire that mindset, honestly. Still, the fact that Takotsubo cardiomyopathy is a real possibility is enough to unsettle some people who already tend to feel things a little more than others, that's for sure.