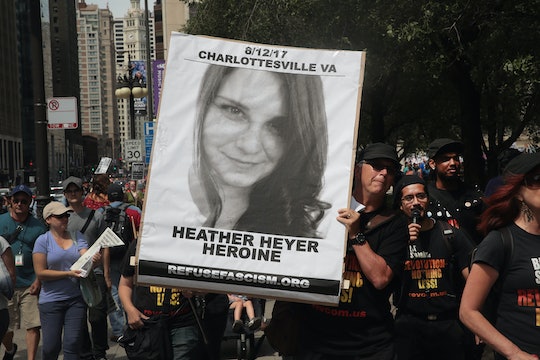 Heather Heyer's Mom Responds To Her Death In Charlottesville, & Her Message Is A Must-Read

On Saturday, 32-year-old Heather Heyer was killed in Charlottesville, Virginia, after a 20-year-old alleged white nationalist protester plowed his speeding car into a group of people who had gathered in counter protest against a planned "Unite The Right" rally. News of Heyer's death quickly led to widespread outrage across the country, and now, those who knew and loved her are speaking out about her legacy. On Sunday, Heather Heyer's mom responded to her death in Charlottesville, and although her heartbreak must be overwhelming, her words focused instead on the need to rise up and fight back against hatred and bigotry.

In an interview with The Huffington Post, Susan Bro said that her daughter had attended the counter protest in Charlottesville because she felt strongly “about bringing an end to injustice,” and added, “Heather was not about hate, Heather was about stopping hatred." The fact that Heyer was killed as a result of the very hatred she was trying to push back against is beyond infuriating, but Bro said that it's not enough to simply be angry about what happened. She told The Huffington Post,

In the wake of Heyer's death, details of the Virginia paralegal's life and her attempts to fight for social justice have emerged, and many have taken to social media to praise the fact that she took a stand against the protest, even though it ultimately cost her her life. But Bro said that, to her, Heyer's decision to attend the counter protest wasn't even slightly surprising, and that her daughter "always had a very strong sense of right and wrong," even as a young child. And while it might be easy to get stuck feeling angry or helpless about the fact that so many people could actually feel emboldened to proudly attend a white nationalist rally in 2017, Bro said that, more than anything, she felt proud of her daughter's peaceful protest, and argued that her death should ultimately be viewed as "a focal point for change."

That sense of pride was echoed by Heyer's childhood friend, Felicia Correa, who told The Washington Post that, even as a young girl, Heyer would stand up for other students who were being picked on, and that that aspect of her personality never changed. Of her death, Correa said,

She died for a reason. I don’t see any difference in her or a soldier who died in war. She, in a sense, died for her country. She was there standing up for what was right. I just want to make sure that it wasn’t in vain.

Heyer's death has led to an outpouring of public support, and in a tweet, Sunday afternoon, Virginia Gov. Terry McAuliffe praised Heyer for "standing up against hate [and] bigotry." Charlottesville Mayor Mike Signer also spoke out about the incident, and in an interview on NBC's Meet The Press Sunday, he emphasized that Heyer's death was a "terrorist attack with a car used as a weapon," according to NBC News. In a Monday morning appearance on Good Morning America, Attorney General Jeff Sessions agreed that Heyer's death "does meet the definition of domestic terrorism in our statute," and said that the Department of Justice "will charge and advance the investigation towards the most serious charges that can be brought" over what he called "unequivocally an unacceptable evil attack," according to ABC News.

In a statement released Saturday though, President Donald Trump seemed reluctant to take a similarly strong-worded stance against the man who killed Heyer. According to The New York Times, Trump instead condemned what he called the “egregious display of hatred, bigotry and violence on many sides,” without actually singling out the white nationalist groups or the alleged driver's actions. In response to criticism over Trump's statement, White House officials said Sunday that the president “condemns all forms of violence, bigotry and hatred," which includes "white supremacists, K.K.K. neo-Nazi and all extremist groups.”

Despite Trump's lukewarm statement, it's clear that Heyer's death has made a huge impact on people all over the country: a GoFundMe campaign set up in Heyer's honor has already ended, after raising more than $225,000. And while the fact remains that Heyer's death is a tragedy that should never have even occurred, she has also become a important symbol for why it's so crucial that we don't shy away from standing up against racism and hatred. And although anger over her death is inevitable, it's essential that her legacy and message is one that isn't forgotten.