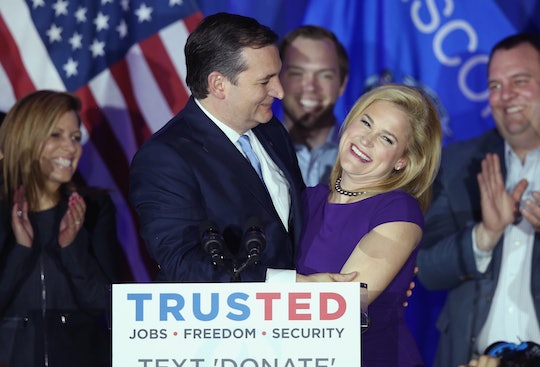 If you’ve been on the Internet at all during this historically wacky election season, you more than likely have stumbled upon some unbelievable rumors or shocking claims about the 2016 presidential candidates. For example, it turns out many on the Internet seem to believe that Texas Sen. Ted Cruz might actually be the infamous Zodiac Killer that terrorized Northern California in the late ‘60s and early ‘70s. While in reality the facts about him make it seem highly unlikely that he was behind one the country’s biggest unsolved mysteries (Ted Cruz was born in 1970, two years after the first murder took place, so it's pretty much impossible, unless he's a time traveler), most people are still enjoying the joke. But the senator's wife definitely isn't laughing. In fact, in a comment to Yahoo News on Monday, Heidi Cruz said the Zodiac Killer comparison is “garbage."

The Yahoo News reporter had apparently asked Heidi for her reaction to the series of jokes about her husband that host Larry Wilmore told at this past weekend's White House Correspondents' Dinner. After referencing the Internet meme, Wilmore joked, "Recently Ted Cruz got a string of wins and endorsements, then everybody remembered who Ted Cruz is, the Zodiac Killer ... [And then he] got zero delegates in New York."

Heidi Cruz was not pleased. "Well, I’ve been married to [Ted] for 15 years, and I know pretty well who he is, so it doesn’t bother me at all," she said. "There’s a lot of garbage out there.”

This Zodiac Killer business started back in 2013 and has transformed into a collection of hilarious, viral Internet memes and tweets since then. Redditors and Tumblr fans in particular have eagerly and hysterically been drumming up outlandish faux "proof" of the senator's connections to the serial killer, knowing full well that it's certainly false. Regardless, the comparison has really taken on a life of its own during his race to the White House:

In February there was even a poll taken by Democratic-leaning Public Policy Polling that showed that 38 percent of Florida voters thought it was possible that Ted Cruz really was the Zodiac Killer, with 10 percent of voters absolutely sure he was the killer.

Heidi told Yahoo News on Monday that it was "amazing how a lot of people are swayed by” the Internet, and blamed the media for the popularity.

For now, the Zodiac Killer is most likely still out there (or dead). So of course, the whole "Ted Cruz is the Zodiac Killer" theory isn't the best, but at least people have something else to talk about online than the senator's poor campaign performance of late. Right?