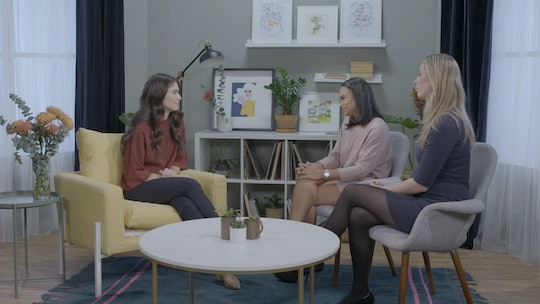 Ask any adult to describe what their childhood was like, and they'll most likely include some detail about their parents — “my mom and dad were way too strict” or “they let me do whatever I want” — because it’s an integral part of every person’s backstory. What’s just as important is how they reacted to said type of parenting style and how it shaped them into the person they are today. Perhaps that's why the topic of parental involvement and how much is too much can be such a polarizing issue. In the fourth episode of Romper's video series, Bearing The Motherload, "Helicopter Parenting vs. Hands-Off Parenting" (embedded below), we hear from two moms who have opposing views on how much parental involvement is ideal when raising kids, as well as from experts who reveal how these different approaches can affect children well into adulthood.

Whether someone chooses to take on the role of a helicopter parent, the cool lackadaisical guardian (that, let's be honest, all the kids envy in middle school), or even aims to fall somewhere in the middle, an outside party will undoubtedly have an opinion about it. But here's a revelation: the method in which parents choose to rear their children doesn’t guarantee anything. The most strict and relentless “tiger mom” won’t definitely raise a brain surgeon or Wall Street wolf, while the most carefree dad isn't "obviously" raising a delinquent.

We all want the same thing: to raise a “good” person, hopefully with minimal speed bumps along the way. There is no right or wrong, black-and-white way to do this, contrary to what some may believe. And the fact that there is every type of success story, family history be damned, is proof that there is more than one parenting path that works.

But what influences the way we parent the way that we do? Well, a lot.

Jennifer, one of the mothers who is interviewed in this episode, lives in New York City where she is raising her 15-year-old and 19-month-old sons. The stress of living in a metropolis paired with the fact that her older son is in high school (where she knows temptations are bountiful), are only a couple reasons why she has chosen to take on the role of a "drill sergeant". If you ask her, it has all paid off: Julius, her eldest, is on the honor roll at school, and "Because I’ve been there for Julius and helping him make decisions,” she says, “I trust that he is prepared to make the best decisions on his own."

Lizzie, on the other hand, lives in the suburbs with her husband and 14-month-old daughter. She arrived stateside five years ago, and her cool accent isn't the only thing she brought with her from the Netherlands. She believes, based on the experience of her own upbringing, that less is more in the realm of parenting. "We had to figure things out by ourselves," she reveals. "I’m trying to do similar things with my daughter. When she runs all over the place I kind of let her go." In turn, Lizzie hopes that her young daughter will learn from the mistakes that she is bound to make along the way.

Both make a good point. "Studies have shown that children whose parents are directly involved what their child, in particular their education, achieve more in school," stated the Illinois State Board Of Education. This is because "children actually respond very very well to structure," explains family and child therapist Meredith Shirey.

On the flip side, an environment where child is free (maybe even encouraged) to make mistakes, teaches them valuable lessons about independence that can't be taught through a textbook. The cons of being too overprotective, according to Marcia Sirota, a psychiatrist and author specializing in relationships and childhood trauma, are as such: If they never learn to "how to cope with adversity or solve their own problems," especially of adult life, "they’re just as incompetent as an abused child, because they both end up feeling a lack of confidence and a lack of skills," she explains.

If being a super-involved parent encourages structure and helps children do well academically, but being overprotective can hobble them as adults in society because they're not equipped to make decisions on their own, what's a parent to do? How about a little bit of both.

There are pros and cons to each approach. As you are allowed to raise your children in the best way that you see fit, it's important to recognize that every other parent is too (provided no one is being abused or breaking any laws). By being open minded about the various styles of parenting, you are not only setting yourself up to be more limber as a parent when things go awry (because at some point, it undoubtedly will), but also showing your children that there are multiple effective ways to tackle a situation.

That is a lesson that never gets old.

More Like This
17 Best Potty Training Products For Toddlers
From Captions To Gifts, These Are All The Kindergarten Graduation Ideas You Need
The 40 Best Toys For 6-Month-Old Babies
The Best Apps For Selling Used Baby Gear