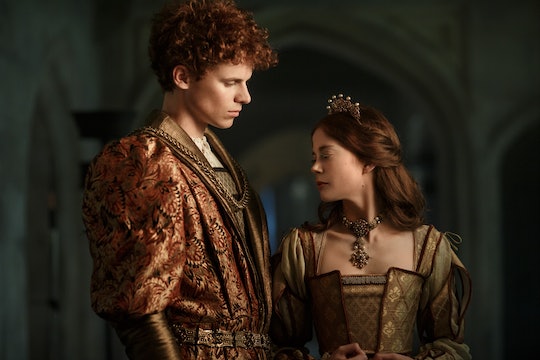 Henry & His Grandma Have A Scripture Battle On 'The Spanish Princess'

Now that Prince Arthur has gone to an early grave on The Spanish Princess (R.I.P. his bobbed haircut), his family has to decide what steps to take to secure their legacy. Henry is next in line for the throne, but he doesn't want to lose out on an alliance with Spain, especially now that he's falling for his late brother's wife. Henry wants to marry Catherine on The Spanish Princess, which is a complicated situation whose consequences will reverberate for decades. Remember Season 1 of The Tudors? Yeah.

The issue with Henry marrying Catherine is not just one of creepiness, though that is definitely its own problem. Marrying your dead brother's wife shortly after his death is not a good look, but it also might be blasphemous. In this exclusive clip, young Henry tells his grandmother Margaret Beaufort that they can't let "so valuable a princess" as Catherine "go to waste." Spain is powerful and rich, two qualities that would make them a beneficial ally to England. If the Tudors don't find a way to hold onto Catherine, then she might be married off to French royalty. If France and Spain joined forces, England could become a target.

At this point, I feel moved to point out that Henry is shirtless for this entire conversation. Because of course he is. How else will you know how terribly, terribly sexy he is if he isn't talking politics topless with Grandma?

In this exclusive clip Grandma listens patiently to Henry's rationalizations for marrying Catherine, but then goes straight to the holy book itself for refutation. "If a man shall take his brother's wife, it is an unclean thing and they will be childless," she says. "Leviticus." Henry, however, is more than ready for this. He fires back with his own biblical evidence.

"If brethren dwell together and one of them die with no child, the wife of the dead shall not marry a stranger," he recites. "Her husband's brother shall take her as a wife and perform the duty of a husband. Deuteronomy."

Margaret is not down for Henry's interpretation of the scripture (though she is very proud of him for having it memorized!). She thinks there there are other, better princesses out there whom Henry could marry instead, but he counters that the Spanish alliance was their "holy grail." What changed?

I think the fact that she got hitched to your brother is enough, dude. Grandma puts it more plainly. She believes Catherine is "bespoiled" and because this is the 16th century, virginity is everything. Catherine (both historically and in the show, whether it's true or not) asserted that she had never slept with Arthur. She was still a virgin when he died. Henry chooses to believe her here, though Margaret isn't as certain.

In response, Henry has a little teenage snit and wants to know if Margaret thinks she's smarter than him. I guarantee that she is, but she defers to his ego. He ends the conversation by forcing an agreement. He's going to marry Catherine, and it doesn't look like he's going to let anyone get in his way.