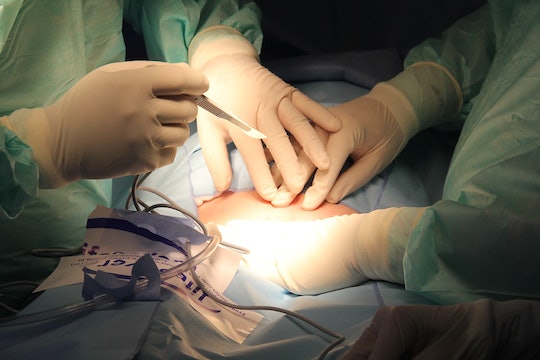 Here's What Is Actually Costs To Have A C-Section

If you're pregnant or wanting to become pregnant you may have already envisioned your child's birth. For some it may be a medicated birth at a hospital, or a drug-free water birth. For others a C-section, either planned or unplanned, may be medically necessary. My first C-section was not planned and there were two things I was shocked about: the recovery time and the cost. No one told me how much more expensive it was. It's important to know all of the additional costs C-section patients have to deal with so you don't have to be surprised like I was.

Generally speaking, C-sections are only performed for health reasons related to the mother or the baby like breech position, multiples, or past abdominal surgeries. But it's hard not to notice the obvious increase in C-sections this country has seen recently. According to the American Congress of Obstetrics and Gynecologists (ACOG), C-section rates in the United States were at the highest levels ever in 2009, with more than 1.3 million C-section deliveries (32.9 percent of all births) performed. With C-section rates on the rise many are questioning if they've all been medically necessary, especially considering the risks and costs to pregnant women.

I had my C-section in January 2010 in a hospital that had an 82 percent Cesarean rate. I still question whether my induction was medically necessary or not. To be honest, out of the whole birthing ordeal the thing I question the most is, how could my C-section cost as much as a house down payment? It's baffling. I knew that birthing a baby wouldn't be as cheap as going to the dollar store, I was ready for that. But I was thrown when the bill arrived for my C-section. If I didn't have health insurance I'd probably still be paying it off.

To help you prepare for the birth of your baby, it's important that you are privy to the costs you could incur should a C-section become necessary. Here are seven costs to consider.

More Like This
Turns Out, You Can Dilate Pretty Far Before You Actually Go Into Labor
Barre Could Be The Low-Impact Prenatal Workout You Need
This Is How Your Water Breaks During A C-Section
21 Earthy Baby Girl Names For Your Little Force Of Nature