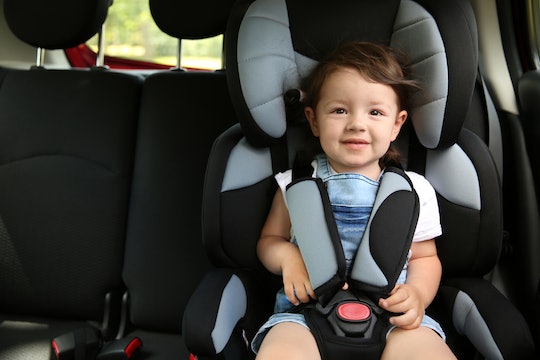 Car accidents are frightening, whether you are a parent or not. But when you have a little child to care for, you see every vehicle on the road as a possible death trap. That's why every parent should be diligent in following current child seat safety recommendations — it can be lifesaving. Need proof? Here are four car seat safety studies every parent should read.

Car seat misuse in the United States is far too common. According to the U.S. Department of Transportation's National Highway Traffic Safety Administration, parents fail to use or install child seats properly 59 percent of the time. When broken down by type, forward-facing seats are most misused, at 61 percent. Rear-facing infant child safety seats follow close behind, with a 49 percent misuse rate.

And car seat misuse can have serious consequences during a crash. According to the U.S. Centers for Disease Control and Prevention, more than 660 children ages 12 and younger died, and more than 121,350 were injured, in car accidents during 2015. Of those kids killed, 35 percent were not buckled in their seats. In one year, more than 618,000 kids ages 12 and younger rode in vehicles without being strapped into a car seat or booster seat, or using seat belt, at least some of the time, the CDC reported.

A 2015 study published in the Journal of Traffic Injury Prevention discovered that infants in rear-facing seats can sustain serious head injuries in rear-end collisions. Researchers from Robson Forensic found that, in rear-end crash tests involving infant-sized dummies, the injuries occurred from the rear-facing seat pitching forward, causing the child's head to be thrown into the back of the vehicle. Lead author Jamie Williams told the Washington Post that the magnitude of the head strikes, but not the injuries themselves, were "surprising."

This study brought up two important issues. First, how you attach the seat matters: According to the Washington Post, the researchers found that the head injuries were far more serious when a rear-facing car seat was attached using the lower anchors rather than installed with a seat belt. Second, always have your child examined after a crash: As Williams noted to the Washington Post, injuries will occur because "it's basic physics," but young kids don't have the words to tell you how much pain they are feeling and where it hurts. The study gives parents some insight into what can happen from a rear-impact accident and what to watch out for in their children.

Rear-Facing Car Seats Are Still The Safest For Young Children

The 2015 Journal of Traffic Injury Prevention study did worry child safety experts. According to the Washington Post, experts were concerned that parents would interpret the study as saying that rear-facing seats are dangerous. But that is not at all the case. Decades of research has shown rear-facing child seats are the safest for children 2 years old and younger. (The American Academy of Pediatrics now recommends that child stay rear-facing until they reach the maximum height and weight set by the manufacturer.) A 2007 study published in the Injury Prevention discovered that children under 2 years old were far more likely to be injured or die in a crash if they are sitting in a front-facing seat; specifically, rear-facing seats were found to be 15 percent more effective in preventing injury or death than front-facing seats.

A rear-facing child safety seat does a better job of supporting the head, neck and spine of infants and toddlers in a crash, because it distributes the force of the collision over the entire body.

Should A Child Sit In The Front Or The Back?

The following study isn't specifically on the safety of car seats, but the research is important for parents to read. A 2009 paper published in the Journal of Traffic Injury Prevention found that the risk of injury was reduced significantly for children up to 12 years old who sat in the back seat. More specifically, kids sitting in the rear row of a vehicle were one-half to two-thirds as likely to be injured than children in the front of the car. This study only supports CDC recommendations against installing car seats in the front seat because of the risk of death in the event of a crash.

A car accident can change your life instantly. It's important to familiarize yourself with current car seat research to make sure you are doing everything to keep your baby safe.

More Like This
New Study Finds Brains Of Teens Who Lived Through The Pandemic Aged Faster
Viral Reddit Post Asks If A Toddler Can Watch Cartoons Without Headphones On A Plane
Is It Good For Babies To Be Exposed To Germs? It’s Complicated
Here’s Why Your Vagina Itches At Night, According To Experts