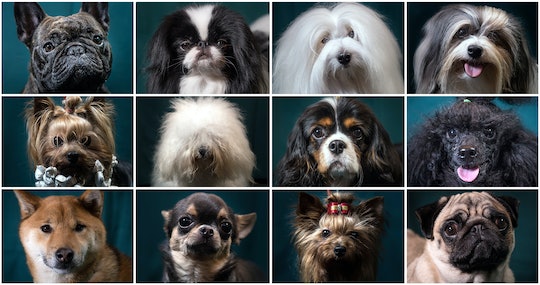 Admittedly, I'm a cat person. I have been since I was a teenager. I named my first kitten Athena. But even I can't deny that dogs are just the cat's meow — especially short, chubby, and fluffy ones who wear sunglasses and a bandanna. My partner and I are raising our toddler with two tabbies he just adores, but we're hoping to adopt a dog soon. Not only because we want to see being corralled by a corgi, but because there are studies that prove dogs are beneficial to your kids' health. (Don't worry, cat lovers, felines have a positive impact too.)

According to new data released by the University of Alberta, parents who own dogs, either during pregnancy or in the first two years following birth, will have healthier babies. (The researchers studied more than 700 families who had dogs, cats, or both, though the majority of the households owned at least one dog.) The study, published in the journal Microbome, found that babies who were exposed to furry pets early in life produced two types of useful gut bacteria: Ruminococcus and Oscillospira. Those two kinds of bacteria have been known to reduce the risk of childhood allergic diseases and obesity.

That's not all our furry friends can do for babies. Newsweek reported in 2015 that children who grow up with dogs are less likely to develop asthma. European researchers analyzed data on more than one million children born in Sweden between January 2001 and December 2010 and found that the asthma rate was 15 percent lower in kids who had dog companions in the first year after birth than those who didn't. According to Newsweek, the findings support the theory that living in an environment that's "too clean" can actually have an adverse effect on your health, known as the "hygiene hypothesis." Tova Fall, coordinator of the Swedish study, told Newsweek,

If we look at this history, we’ve been living with dogs for a very long time. It’s the first pets we had.

Pets can also keep you from getting sick. In 2012, a study published in the journal Pediatrics discovered that babies who grow up with a dog or a cat were less likely to get sick. And dogs are also great for your heart health. According to Harvard Medical School, multiple studies have shown that people who have dogs have lower blood pressure, a lower risk of heart disease, and lower levels of cholesterol and triglycerides.

The correlation between pet ownership and better health is not clear. But there's enough evidence to prove that all babies should grow up with a pet (unless allergies say otherwise, of course). Now excuse while I had to Petfinder.com.