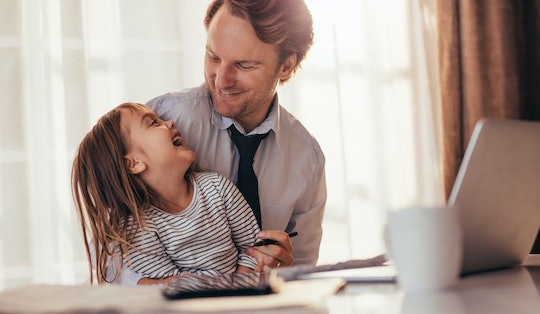 These Are The Best & Worst States For Working Dads, According To A New Survey

It's an understatement to say that being a working parent is difficult. Handling your responsibilities as a caregiver and a professional seems nearly impossible most of the time. And that's just on a personal level; when in you factor in state-level policies, striking that elusive work-life balance can feel like a dream you'll never realize. So which regions provide support for working families and which ones don't? For fathers, here are the United States' best and worst states for working dads.

On Monday, personal-finance website WalletHub released its 2018 Best & Worst States for Working Dads ranking report, according to WXYZ, and the findings are eye-opening. Overall, Connecticut takes the top spot this year as the best place for fathers to thrive as both a professional and a caregiver, while West Virginia ranks dead last. There were three major factors that placed these states either high or low on the list, reported WXYZ: Child care costs, median family income, and life expectancy.

Nearly 93 percent of fathers who have kids under the age of 18 are working, according to the U.S. Bureau of Labor Statistics, which means living in a state that provides better economic opportunities and quality of life is vital. Read on to find out more how these states benefit or hurt dads and their families.

There are a few reasons why Connecticut took the top spot on WalletHub's 2018 ranking report. The East Coast state has one of the lowest percentage of youth living in poverty, and is among those states that have the highest life expectancy among men, according to WalletHub. Interestingly enough, Connecticut ranked in fifth place in WalletHub's 2018 report on the best and worst states for working moms, according to WFSB.

Minnesota has the highest median family income, the highest life expectancy among men, and one of the lowest rates of uninsured males, according to WalletHub's findings. Although Minnesota lands in second place, the state does take the top spot for overall economic and social well-being, as well as overall health rank, WalletHub found.

It's no surprise that Massachusetts would find itself in the top three states for working dads. The New England state has one of the lowest rates of children under the age of 18 living in poverty, according to the National Center for Children Living in Poverty. WalletHub also ranked Massachusetts as the best state for child care, and in third place for overall health.

There are a few reasons why Nevada has landed on the bottom of WalletHub's 2018 ranking report. It has one of the highest child care costs, the highest unemployment rate for dads with young children, and one of the highest uninsured rates for men, according to WalletHub. WalletHub also ranked Nevada second-to-last when it comes to overall economic and social well-being.

Although Mississippi is ranked second-to-last on the list, it did land in the bottom spot when it comes to overall health. That's not surprising, however: WalletHub reported that Mississippi not only has the lowest men's life expectancy, but it also has one of the highest rates of children under the age of 18 living in poverty. Those findings reflect what was found in the United Health Foundation's 2017 America's Health Rankings report, which ranked Mississippi as the worst state for women and children's health. Interestingly enough, Mississippi does have the lowest child care costs out of all 50 states plus the District of Columbia, according to WalletHub.

Like Nevada, West Virginia is among the bottom states that have the highest unemployment rate for fathers with young children, according to WalletHub's ranking report. The state also has one of the lowest life expectancy rates for men, and is ranked among the least healthiest states overall.

In the end, WalletHub's 2018 rankings report shows that working dads need more support when it comes to not only providing for their families, but taking care of them as well. Hopefully, the bottom three states will take more care to invest in their futures.