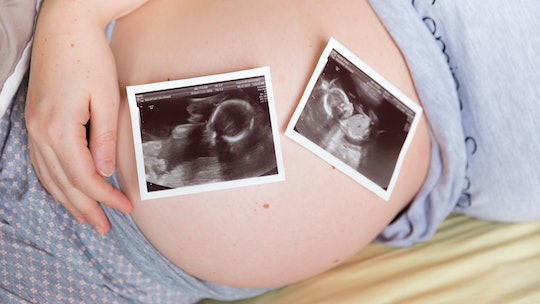 Here Are The *Real* Signs You're Having Twins

If you're wondering as to whether or not you're having twins, the answer might seem kind of obvious. I mean, just go to the doctor, right? Well, yes, go to the doctor, but if you've yet to schedule an appointment to confirm your pregnancy, and you're not what one would consider a patient person, there are a few ways you can figure it out all on your own. So, what are the real signs you're having twins? I mean, actual signs that can give you a heads up before you're 12 weeks pregnant and laying on an exam table while an ultrasound technician puts that freezing cold gel goo on your stomach? They're few and far between, to be sure, but there are a few ways your body is trying to tell you you're growing two human beings, instead of just one.

It will be easier to tell these symptoms and signs if you've had a single pregnancy previously, only because you'll have something to compare your second pregnancy symptoms to. Either way, though, and according to the American Pregnancy Association (APA),it all comes down to the following, undeniable fact: twin pregnancies can cause increased symptoms, from nausea to fatigue. In other words, if your morning sickness is double the "fun," and you're twice as exhausted as you were when you were pregnant with your first, you might have two buns in the oven.

According to What To Expect, with a twin pregnancy you're usually more likely to gain wait faster than with a single pregnancy. Likewise, you might experience extreme fatigue and extreme nausea that is more intense than a single pregnancy. You might experience pregnancy anemia symptoms, too, like shortness of breath or lightheadedness and headaches, according to What To Expect. Finally, you might be more prone to varicose veins with a twin pregnancy, which can give you a hint of what's coming before the ultrasound confirms it.

According to Parents, "Women who are carrying twins may be more likely to suffer from the extreme version of morning sickness called hyperemesis gravidarum (HG), which is when nausea and vomiting is so severe that a woman may need intravenous fluids and other assistance." Of course, if you've been diagnosed with hyperemesis gravidarum, you've probably already visited your OB-GYN and had your twin pregnancy confirmed. Still, if you'er suffering from HG and you're expecting twins, it's safe to assume the two are related. (Although, it's also worth mentioning that women pregnant with only one child can experience HG, too. You just can't win, you guys.)

Another sign that you're having twins might be that you have elevated hCG (human chorionic gonadotropin) levels, according to Parents. Doctors check hCG levels to ensure the viability of the pregnancy, but especially high levels can indicate a potential twin pregnancy. Keep in mind that high levels of hCG can also simply be an indication of a single pregnancy, so you'll want to chat with your doctor about what the likelihood is that elevated levels mean a multiple pregnancy for you.

Do twins or multiple pregnancies run in your family? If so, these signs might be just the hint that you're going to be expecting double in the baby department. But, again, the only way to know for sure is to have your twin pregnancy confirmed by a licensed and practicing OB-GYN.