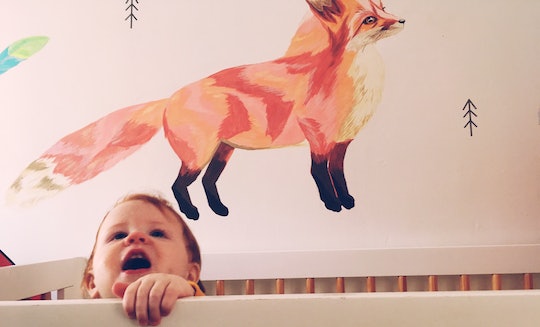 Here Is How 3 Sleep Methods Looked A Year Later

The biggest myth about parenting is that you step in the realm with a furnished plan about exactly how you will address feeding, sleeping, disciplining, and so on. That you leave the hospital with an "I'm with my attachment parent! ⬆️ " baby onesie or "TEAM CIO" varsity sweater. In fact, when it comes to sleep, especially, parents often try multiple methods to find the approach that best works for them, and hop "teams" a few times before they settle on something. The decision whether or not to sleep-train is a tricky choice made in the thunder dome of infancy (when the entire family is suffering disrupted sleep), but parents often worry about the long-term effects of their choices.

So how did different sleep approaches turn out for the families who tried them? We asked three mothers to give us an update on their methodology one year on. There is nothing scientific about their outcomes — each is a test-case of one — but some curious commonalities to all their stories.

Each time the cries got shorter and shorter, until the day I was able to put her down for a nap while she was still awake. She smiled, grabbed her stuffed doggy, and closed her eyes.

The Family Who Did Cry-It-Out

We came to the decision to let our daughter cry-it-out (CIO) because we simply didn't know what else to do. My daughter was a strange case in that her bed time sleep all in all pretty good for her age. She went down fairly easily and woke up once in the night to nurse and generally wake back to sleep easily again. Nap time however was a different story. If she did sleep during naps it was for 30 minutes tops and she would not go back to sleep no matter what I tried. And I tried everything; everything I could think of, everything on the Internet, every single piece of mom-advice I received. I tried. The first we tried CIO was really difficult. For almost that whole week, she spent most of her nap times crying and so did I. But each time the cries got shorter and shorter, until the day I was able to put her down for a nap while she was still awake. She smiled, grabbed her stuffed doggy, and closed her eyes. That was how I knew we'd made the right decision.

The Family Who Did Cry-It-Out Now

One year later her sleep was pretty incredible: she started putting herself to bed, essentially, and still does to this day. Often when we tell her it is time for a nap or bedtime, she'll walk over to the stairs. She has asked on multiple occasions to go to bed when she is tired. She still goes through sleep regressions which require a different handling — we generally don't practice CIO anymore. But that's mostly because she's moved to a toddler bed, and when she's awake she usually gets up and plays quietly. Many times we've come into her room after a nap and found her reading a book to her stuffed animal or playing with her babies. Sleep was one of the most stressful things about my parenting experience in my first year of motherhood but it's not like that anymore. She sleeps at least an hour and half everyday and often gets close to 12 hours at night. One year and beyond our decision to CIO, I'm more concerned with my sleep than hers. — Ceilidhe Wynn

As a first-time parent of a six-month-old, I had exactly zero idea how to get the baby to sleep. I guess I figured babies were like puppies — they'd roll around adorably until they got tired, then fall asleep on the floor. Yeah, no. For about a month she pretty much only slept when she was strapped to my chest in the Baby Bjorn. Then my friend talked me into attending a Baby Expo, where a sleep expert with a fluffy-cloud stall noticed that I looked like death. With oceans of pity in her eyes, she helped me fill out a card for her raffle — a week's worth of tailored sleep solutions for a red-eyed mom and her baby. And we won! I learned that the baby should be napping for several hours twice a day (!!), and for 12 hours (!!!) each night.

Bedtime was horrible. My husband and I drank beer and played gin-rummy with shaking hands while the cats stared at us accusingly.

Setting up the bedroom for optimal baby sleep was the best, and I remember it as a montage: putting up blackout curtains (actually, we couldn't afford them, so we covered the windows in black tape), choosing a sound machine, setting the thermostat to a precise 72 degrees, practicing my 30-second lullaby. Unfortunately, the hard part came next. According to the sleep specialist, my. baby had to learn not to "fear the crib," so we had to let her cry for three minutes, then five minutes, then 10, every night. If she hadn't settled yet, it was time to try "extinction." Bedtime was horrible. My husband and I drank beer and played gin-rummy with shaking hands while the cats stared at us accusingly. (They would never let their kittens cry it out, never mind that they're both spayed.) I kept reminding my husband and myself what the sleep specialist said — that this was better for her in the long run. Yes, crying pumps up their cortisol, but so does the stress of sleep deprivation, and over time, that's far worse. I believe her, and yet, if there's a hell for me somewhere, it will be letting my baby cry it out forever and ever.

The Family Who Feberized Now

Now, at 14-months-old, the baby sleeps like a dream (unless she's sick) and naps twice a day for at least an hour at a go. The routine soothes both her and me. On her off days, I don't let her "cry it out" anymore. Her habits are formed, I know, and one long night here or there won't hurt anything. People gasp when I tell them we pursued this method, and I totally get that. Before I was a parent, I'd have judged me, too. But nine months ago, my family was falling apart. The baby had purple shadows under he eyes, my husband was sick all the time, and I was a nervous wreck with crippling back pain from constant wearing of the Baby Bjorn. Now when I read the apparently evergreen articles about how sleep training hurts babies, I feel physically sick. Then I look at my daughter, who's doing so well. Every night now, and very cutely, she kicks her feet and flexes her toes, practicing walking in her sleep. — Kelly McMullen-Williams

The Family Who Bed-Shared

Like most new mothers, I received the go-to question from virtually every human who knew I recently birthed a child: "Is the baby sleeping through the night?" At about six months, she was in fact allowing me to get some shut eye, because after I returned to work full-time, the decision to bed-share was made for me. The only way I could be a functional human being at work was to improve my sleep deprivation. For my breastfed toddler, rolling over to quickly nurse her back to sleep eliminated me having to physically get out of bed for night feedings — which were mostly for comfort at this point — let us both get back to our dreams quickly.

As a parent robbed of baby bonding during the day, I also appreciated bed-sharing with my tiny human at night for the closeness.

Fast-forward to 18 months, my daughter was still in the bed and nighttime nursing.

The Family Who Bed-Shared Now

Fast-forward to 18 months, my daughter was still in the bed and nighttime nursing. But those cute infant bonding sessions were less snuggly and more like those memes of moms sleeping with mobile toddlers who kick them in the shins. At this point, however, we were stuck in our routine and less concerned, really, about a bed transition. Bed-sharing made our lives easier and allowed us to sleep better. — Ashley Stoney