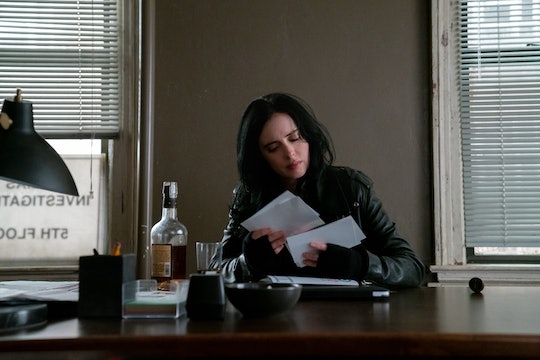 It's been a long time since Jessica Jones fans have gotten to see the titular private investigator take on a new case. Season 2 aired in March 2018, which means its been just over a year since any new episodes have debuted. But Season 3 will drop on Netflix on Jun. 14, so you'll need a Jessica Jones Season 2 recap ahead of the Season 3 premiere. A refresher on everything that came before will prepare you for what's coming next.

When Season 2 started, Jessica had just defeated Kilgrave, the man who used his mind-control powers to abuse her for years. The trauma of that abuse haunted Jessica throughout the first season but she was finally able to destroy Kilgrave in the finale. In Season 2, she was free from him, but her past wasn't done with her. After being pressed by her bestie and adopted sister Trish, Jessica finally delved into one of the most painful periods in her life: the death of her family.

When Jessica was a teenager, her parents and brother were (presumably) killed in a car accident. She survived, but was experimented on by a company called IGH; as a result, she gained her superhuman strength. IGH reappeared to bestow powers on Trish's cop boyfriend Will Simpson in Season 1, so she was all for Jessica exposing the mysterious group in Season 2.

Jessica was less enthusiastic about it, but she got on board eventually. A string of dead bodies led Jessica to a strange woman with powers just like hers; though her identity remained in question for many episodes, it was finally confirmed that she was actually Jessica's mother, Alisa. She also made it out of the wreck alive and was experimented on by a doctor named Malus, which left her unstable and violent.

Jessica was already reeling after learning that her mom was alive, but she also had to contend with the fact that Alisa was unrecognizable in pretty much every way. Alisa was unpredictable and quick to anger; though she was protective of Jessica, it was at great cost to everyone around her. A flashback revealed she'd even killed one of Jessica's boyfriends once. And you thought your Thanksgiving dinners were tense!

Meanwhile, Trish was obsessed with having powers and turned into a real jerk. She relied on IGH drugs to give her a boost, but quickly became addicted to her enhanced abilities. It caused her to seek out Malus so that she could undergo the same experiments that gave Jessica and Alisa their abilities. It was incredibly dangerous and she almost died, but Jessica managed to rescue her and take her to the hospital. Trish was not appreciative. In the aftermath, Malus killed himself rather than face arrest for his actions.

At that point, Alisa was already in jail for, you know, all the murdering she had been doing. Her guard had a violent streak himself and Jessica ended up having to kill him in self-defense. It made her question her own identity. Was she as out of control as her mother? Had everything she'd experienced made her violently destructive? Questions for another day, because there was more plot to get through!

Alisa broke out of prison when she found out about Malus' death; they were very close, so the news sent her into a rage. She tried to kill Trish but was stopped by Jessica, whom she subsequently kidnapped. Alisa headed for Mexico with Jessica in tow and Trish hot on their heels. When the mother-daughter vigilantes were forced to stop because of the police, Trish appeared and killed Alisa.

That left Jessica and Trish understandably on the outs, but no one was really on good terms by the end of Season 2. Malcolm was fed up with being used by Trish (she hooked up with him, ditched him, and drugged him) and ignored by Jessica at work, so he moved on to greener pastures. He decided to work with Jeri Hogarth (who was diagnosed with ALS and ousted from her law firm) and Jessica's rival P.I. Pryce Cheng. To be fair, they probably offer better benefits than Jessica ever did.

Trish may not have been able to make up with her sister, but she did get what she wanted in the end: the Season 2 finale hinted that the procedure worked and she had powers. And lastly, Jessica decided to pursue the season-long romance she'd had going with her building's superintendent, Oscar Arocho.

Season 3 will find Jessica facing off with a new villain, but I doubt her demons are entirely vanquished. She and Trish still have some unfinished business, and it's likely the final season will show them figuring out how to continue their friendship after everything they've been through. I don't know if it's possible to get over your bestie killing your mom, but Jessica Jones may try to find the answer.